I was a pilgrim the summer I was twenty-five. It was a year after my father died, and I was halfway through Harvard Divinity School. As I walked through the forests and fields of northern Spain on the Camino de Santiago, with Alex, my self-proclaimed protector and boyfriend, I learned to start to grieve. Grieving did not come easily or quickly to me. Grief is not something you think you have to learn, but I did. I worked very hard for a year to hold it off, perhaps because to do the work of grief is to admit that the past cannot be changed. More than anything else in the world, that year, I wanted to change the past. I learned to start to grieve in a way that still surprises me, even as I write about it. I began to learn how to grieve when I began to sense God all around me, in mud and slugs, in chickens in a gilded coop, a man who truly believes he is the modern reincarnation of a Knight Templar, Alex’s love. I had never known to look in these places, and the God I found there I had not learned about either as a child or in Divinity School. This was a God I never knew to look for. As my understanding of God expanded and grew with each day and each step, so too did my understanding of prayer. The book is about prayer, defined simply as recognizing God.

“Kerry’s Egan’s Fumbling tugs the reader into the rich mystery of pilgrimage–in her able hands, not only a physical trek to a spiritual hot spot but also a moving exploration of love, grief and wonder. This lovely book called me back every time I strayed away from it, and it will probably haunt me for years.”
— Kris Ohlson, author of the award winning memoir Stalking The Divine 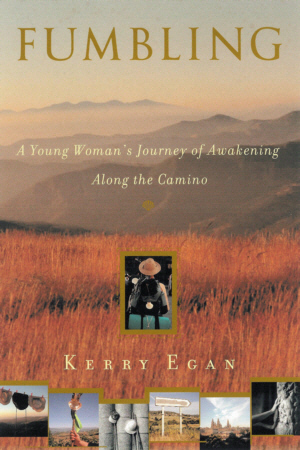