Freudian Matthew von Unwerth’s FREUD REQUIEM places Sigmund Freud, the father of psychoanalysis, on the couch and reinterprets psychoanalysis as “a science of mourning,” while he explores the redemptive possibilities of storytelling, memory, and the creative process. Unwerth recounts details of Freud’s life as he deconstructs one of his most elegant and well-loved essays, “On Transience.”

It is an essay that Unwerth discovered was written by Freud in response to a conversation with the poet Rilke, arranged by Rilke’s friend and lover, Lou Andreas-Salome.

“Matthew von Unwerth has written a brilliant meditation on memory and the struggle against loss and mourning that wears its depth of learning with winning grace. But even more, his recreation of the world of Freud and Rilke and their fellow seekers enchants like a perfectly imagined novella set against the dreams and devastations of the twentieth century.”
— Patricia Hampl author of A Romantic Education and  I Could Tell You Stories

“Freud’s Requiem is a gracefully written, deeply moving, and well-informed meditation on the different ways in which the psychoanalytic and creative impulses deal with the urgent questions of mortality and transcendence. One comes away from reading this original and thought-provoking book with a greater understanding of the forces that shaped the Freudian enterprise in the image of its bold, conflicted, and wonderfully human founder.”
— Daphne Merkin, author of Dreaming of Hitler and Enchantment

“Matthew von Unwerth draws together these delicate threads — memory, mortality, ambition and creativity — and creates something both intellectual and moving. History, biography, psychology and much more.”
— Arthur Phillips author of Prague and The Egyptologist

“This beautifully written and brilliantly conceived book is a gem. The way von Unwerth weaves back and forth between Freud and Rilke illustrates the literary heights to which great criticism rises. It also reads like a detective novel and the reader is kept in expectant suspension right to the very end.”
— Christopher Bollas author of Being A Character, Cracking Up and I Have Heard the Mermaids Singing 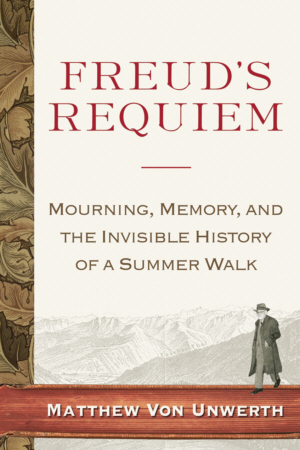