Four years into my psychoanalysis my analyst died. An old world Viennese of immense culture, he had opened up the world anew for me when I felt it might swallow me instead. In his office, accompanied by the tympan rhythm of his old man’s rasp, life became boundless; what had seemed to me an impossible existence was reawakened to the art of the possible. A Jew, he had fled Vienna in the wake of the Anschluss, leaving his family, home and world behind. He came to New York under the sign of mourning, an exile, improvising a new life to replace the one he had lost. The journey that led him to the bookish cavern of his office must have been painful; I know that illness and the pains of age made it so at the end. But in his wry humor, I first understood the depths of the capacity for forbearance in the face of suffering, through what Bertolt Brecht called the singing about the dark times.

Far from the dour encounters of analytic myth, our meetings were often lively conversations on poetry or music or nature or the political world. They were suffused with laughter, and mutual respect, with hope and love. Though we were separated in age, culture and experience by more than half a century, I knew a closeness with this venerable stranger whom I saw but an hour a day that I had not known before with anyone. This closeness allowed me the security and courage to create and explore an inner world of which I had been only dimly sensible, filled with chaos and grace, the musical world of words.

I was frequently reminded in those sessions of the Greek myth of the lovers Orpheus and Eurydice. Finding Eurydice torn apart by lions, the poet Orpheus follows her down into the underworld, and with his sublime song prevails upon Hades to allow him to lead her back into life, on condition that he not look back at her while they returned to the world of the living. But Orpheus is unable to resist, and he sees her for the last time, as she is cast back forever into the kingdom of death. Grief-stricken, Orpheus kills himself and the two are reunited forever in death.

In analysis, lying on the couch, speaking to an unseen presence, like Orpheus I ached to turn around and assure myself of my companion’s existence, to reconcile this physical being with the intimate and strange communion that he purveyed. When inevitably I yielded to the temptation, unlike Eurydice in the underworld, my analyst would always be there behind, unperturbed and unharmed by my anxious insecurity.

My conversations with the analyst turned often towards the prospect of his death. He wondered how it would affect me, whether I had any fears or feelings about an event which, he pointed out, was imminent in a man of his age. But in my mind, conditioned by its inexperience with loss, he was immortal and could not die, and so the possibility of his death, it seemed to me, did not exist.

And then one day the chair stood empty. My analyst’s death ushered into my life a new darkness, from which I only gradually emerged.

It was during the time of my analysis that I first learned of “On Transience,” the essay of Freud’s upon which this book is based, and of the circumstances surrounding its genesis. At the time I was interested in the ways that writers reinvent themselves through writing, and how that process of reinvention resembles the subtle subterfuge in which we all engage to cause the world of our experience to conform to the world of our desires. The story of the frustrated relationship of Sigmund Freud, Rainer Maria Rilke, and Lou Andreas-Salomé, and its reincarnation in a radiant essay by Freud appealed to me, because in its fictional alterations I thought I discerned just such a subterfuge. At the time my interest had little to do with the substance of the essay, which dealt with the transience of nature and of life.

But circumstance intervened. Freud’s Requiem is much transformed from its original conception as a somewhat skeptical inquiry into the deceptive qualities intrinsic to artistic endeavor. Such deception may indeed be at the heart of creativity, of our ability to change the world through our own imagination, but I have found that it is a work born not of calculation, but of necessity and hope. Confronted with the unfathomable fact of loss, we find ways to make that loss bearable, to make the medicine go down better. Because without the medicine of mourning, we cannot go on.

In mourning, like Orpheus, we make our way underground by singing, by telling stories about our lives that give sense and form and meaning to the events and feelings whose enormity threatens to overwhelm us. In telling ourselves the stories of our lives—especially stories of the dark times—in making sense of them, we reclaim lost aspects of our lives, just as Freud did in telling the story now about to unfold, of his afternoon walk with a poet and a taciturn companion.

Born in Atlanta, Georgia, Matthew von Unwerth is Director of the Abraham A. Brill Library of The New York Psychoanalytic Institute, and a coordinator of the Philoctetes Center for the Multidisciplinary Study of the Imagination. He is an advanced candidate in psychoanalytic training in New York City, where he is in private practice. He is currently writing a second book, a novel. 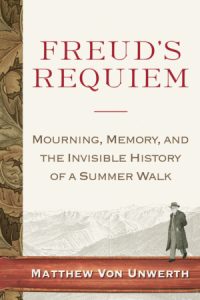