Flood and Redemption in the City of Masterpieces

DARK WATER reminds us why Florence, with its ancient, corrupt, and dangerous beauty, remains a cultural wellspring and the home of everyone who loves beauty.

On November 4, 1966, seven centuries of art met the destructive force of the Arno River when the river overran its banks, threatening the city that is western civilization’s greatest repository of culture. To set the stage, Clark offers stories of some of Florence’s most fascinating past denizens, beginning with Francis of Assisi, Dante, and painters of the Renaissance, then continuing with Leonardo, Machiavelli, Vasari, and the expatriate artists, writers, scholars, and bohemians who brought to the city their ambition, talent, and folly.

After 1966, we meet contemporary figures—a Polish-American painter, a Life magazine photographer, Communist activists, the poor of the Santa Croce quarter, art curators and restorers, and, finally, the young people from all over the world who saved thousands of artworks and millions of books when the waters receded. Their idealism triumphed over the force of nature, but also over incompetence and greed, to restore Florence as the city of art and the capital of bella Toscana.

Robert Clark has written a miraculous book, a passionate inquiry into the spirit that sustains the beauty of art and its more vexing sibling, religion. Dark Water is a mystery story and a memoir, set in a city of incomparable riches and dark fascinations. Clark’s masterwork of quest literature deftly combines investigative journalism, meticulous history and, best of all, a cast of indelible characters whose lives move through Florence and its floods with novelistic power and suspense.
— Patricia Hampl, author of The Florist’s Daughter, Blue Arabesque

“Lovers of Florence / Firenze will fall into Dark Water head first. This is an engrossing, layered, and intelligent voyage into the history of artists’ relationships to the capricious river Arno. Robert Clark deepens our knowledge of this most poetic of cities, with an unstinting and loving examination of the politics and love brought to bear on the flood of 1966 and the on-going reverberations that persist. A formidable accomplishment.”
— Frances Mayes, author of Under the Tuscan Sun

“Robert Clark combines the expertise of an art historian with the sense of drama and eye for vivid detail of an accomplished journalist to give us a compelling and deeply moving account of those few days in 1966 when the accumulation of genius that is the city of Florence proved appallingly vulnerable to the concentrated power of its own flooding river.”
— Barry Unsworth, author of Sacred Hunger and Pascali’s Island 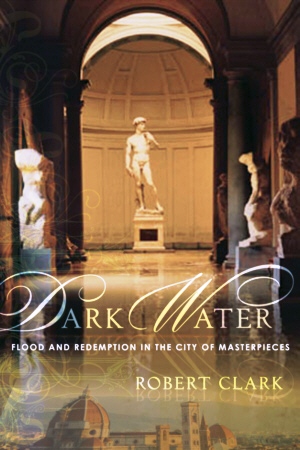