In this luminous and spirited debut, Margaret Wrinkle takes us on an unforgettable journey across continents and through time, from the burgeoning American South to West Africa and deep into the ancestral stories that reside in the soul. Wash introduces a remarkable new voice in American literature.

Along the Tennessee frontier in the early 1800s, two men find themselves locked in an intimate power struggle. Richardson, a troubled Revolutionary War veteran, has spent his life fighting not only for his country but also for wealth and status. But when the pressures of westward expansion and debt threaten to destroy everything he’s built, he embarks on an audacious plan. He sets Washington, a young man he owns, to work as his breeding sire. Wash, the first member of his family born into slavery, struggles to hold on to his only solace: the spirituality and faith inherited from his shamanic mother. As he navigates the treacherous currents of his position, despair and disease lead him to a potent healer named Pallas. Their tender love unfolds against this turbulent backdrop while she inspires him to forge a new understanding of his heritage and his place in it.
Once Wash and Richardson find themselves at a crossroads, all three lives are pushed to the brink.

Written as an accusation, a revelation, and a prayer, this boundary-crossing novel carries the reader from the heart of whiteness into the center of ancestral African spirituality and back again until these two contrasting ways of seeing shimmer together. Questioning all differences of blood and belief, erasing even the line between the living and the dead, Wash sheds new light on our contemporary racial dilemmas.

“A significant and hugely troublesome book.”
— Pinckney Benedict, author of Dogs of God

“Margaret Wrinkle’s Wash is a marvelous window into the world of nineteenth-century American slavery—a powerful fusion of knowledge and imagination.”
— Madison Smartt Bell, author of All Souls’ Rising

“Boldly conceived and brilliantly written, Margaret Wrinkle’s WASH reveals the horrible human predation of slavery and its nest of nightmares. With a truthfulness even beyond Faulkner, Wrinkle makes her novelistic debut in a monumental work of unflinching imagination. Impressive, first-rate? These terms are too tame to describe this magnificent work of literature.”
— Sena Jeter Naslund, author of Ahab’s Wife

“This majestic, beautifully written novel will both break your heart and make it wiser; and when you have turned the last page you will want to tell everyone you know to go out and buy it.”
— Charles Gaines, author of A Family Place

“This exquisite novel is a gift of healing. It exposes the dark and fearsome sin that stains our history, and confronts the guilt that lurks in our collective American soul. But in the genius of the telling we are led to the tenderness at the bone, the humanity at the core, and buoyed by joy.”
— Beverly Swerling, author of City of God

“A unique and powerful story, WASH tells a chapter of our past that we would rather look away from. Margaret Wrinkle makes sure that we cannot. Her whole life has led up to this book, and she writes it in a sure and captivating voice, augmented by her remarkable pictures.”
— Kevin Baker, author of Strivers Row 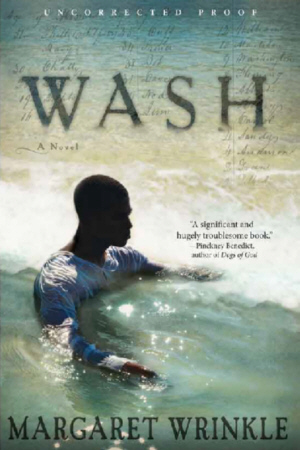