The Falling Woman weaves the interconnecting stories of Charlie Radford, an ambitious airline accident investigator but a failed pilot, and Erin Geraghty, the rumored but real survivor of airline disaster who disappears after miraculously surviving a fall from a passenger plane that explodes over Kansas. If she exists, he’s told, Charlie must find her. But Erin, who has terminal cancer, is not certain she wants to be found.

Inspired by the incredible, true stories of people who survived mid-air breakups, The Falling Woman explores what it means to be singled out by destiny to live, and how these moments, in the midst of an ordinary life, can serve as a wakeup call to the soul, an incentive to find meaning in whatever life is left to us.

The original idea for The Falling Woman emerged from the author’s own journey as a fledgling aviator. As a boy, he dreamed of being a Navy pilot and spent countless hours staring at vapor contrails in the sky, identifying airplane silhouettes, and listening to the trembling whir of turboprops on winter nights. Books about flying—Saint-Exupéry, Richard Bach, and Tom Wolfe—were his scripture. Well on his way to achieving his dream, he suffered a seizure in the cockpit of a Navy training jet. His flying career ended that day. He was 23.

Beneath the surface of The Falling Woman lies the deep and rich mythology of aviation. Why did humans yearn to fly? Why did we take such great risks to conquer gravity? The story of Icarus, the boy who flew too close to the sun, mirrors the author’s own narrative. Metaphorically at least, he had fallen from the sky with melted wings and, on a spiritual level, a part of him died. The loss of his pilot’s wings eventually led him to writing fiction. The Falling Woman has helped him reconstruct a dream in the intersection of his character’s lives while examining the conflicts that arise between family and work, loyalty and betrayal, celebrity, judgment and redemption.

“A stunning debut, The Fallen Woman kept me riveted to the very last page. Without sacrificing an ounce of suspense, Farrell manages to ask the big questions about life and love. This is a novel that is perfect for book clubs.” — Thomas Christopher Greene author of The  Headmaster’s Wife

“A startling and suspenseful debut… Farrell keeps a firm grip on the story’s inherent tensions while also delving into the subtle and profound questions the incredible story provokes.”  —Crime Reads – June 1, 2020 – on 8 Novels You Must Read This Summer 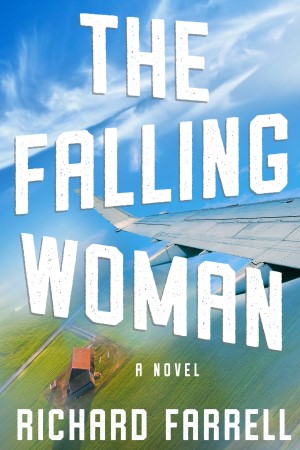