When high schooler Saskia Brown plays around with a vial of liquid mercury, then touches a tattered old daguerreotype, she makes a startling discovery. She is somehow able to visit the man in the daguerreotype: Robert Cornelius, a brilliant young inventor from the nineteenth century. The hitch: she can see him only in her dreams.

Saskia soon shares her revelation with some female classmates. Under Saskia’s guidance, the other girls try the experiment for themselves. They steal portraits of young men from a local college’s daguerreotype collection. Then, each of the girls tries to make contact with her own personal “Mercury Boy,” from an injured Union soldier in the Civil War to a charming pickpocket in New York City.

At night, the girls visit their “forever boyfriends” in their dreams. During the day, they hold clandestine meetings of their new secret society: the Mercury Boys Club. At first, the club is a thrilling diversion from the girls’ troubled everyday lives. But all good things must come to an end, and it’s not long before jealousy, violence, and lies threaten everything the girls hold dear.

“Mercury Boys is a thrilling journey into the perils of adolescent friendship and a touching commentary on love’s timelessness.”
—Tochi Onyebuchi, author of Beasts Made of Night and Crown of Thunder

“With vividly drawn, multidimensional characters and a riveting voice, Mercury Boys weaves a compelling tale of the intoxicating power of friendship, female rivalry, and romance.”
—Kate Marshall, author of I Am Still Alive, soon to be a major motion picture

“In this snapshot of modern teenage life with a historical twist, Prasad creates a world as haunting as a daguerreotype and as vivid as a high-resolution photo. An exhilarating and thought-provoking ride that will make you think twice next time you’re thumbing through a photo album.”
—Michael Belanger, author of The History of Jane Doe

“For history buffs and hopeless romantics alike, Mercury Boys is a compelling, imaginative romp that will leave teen readers longing for an alternate reality—and a Mercury Boy—of their own.”
—Natasha Friend, author of How We Roll and Perfect

“The concept of ‘mean girl’ time travelers has enormous cinematic potential, particularly as it is tethered to the zeitgeist. In Mercury Boys, Chandra Prasad shows her unique ability to give voice to the acute angst of today’s adolescents, caught between the malaise of contemporary society and an inchoate yearning for the values and romance of the past.”
—Amy Adelson, Motion Picture/Television Producer ofAbove Suspicionand You Know My Name 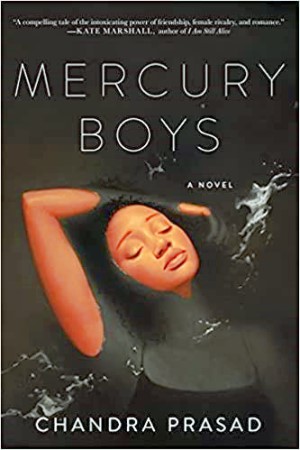