When Ibby Bell’s father dies in a tragic accident in the summer of 1964, her mother unceremoniously deposits Ibby with her eccentric grandmother, Fannie, and throws in her father’s urn for good measure. Fannie’s Victorian house is like no place Ibby has ever been—and Fannie, who has a tendency to end up in the local asylum every once in a while— is like no one she has ever met. Fortunately, her black cook, Queenie—who has run Fannie’s household ever since it was Fannie’s household—and Queenie’s feisty daughter, Dollbaby, take it upon themselves to initiate Ibby into the ways of the South, both its grand traditions and its darkest secrets.
For Fannie’s own family history is fraught with tragedy, hidden behind the closed rooms in her ornate Garden District mansion. It will take Ibby’s arrival to begin to unlock the mysteries there. And it will take Queenie and Dollbaby’s hard-won wisdom to show Ibby that family can sometimes be found in the least expected places.

For fans of Saving CeeCee Honeycutt and The Help, DOLLBABY brings to life the charm of New Orleans in the decade of the turbulent 1960s through the eyes of a young girl learning to understand race for the first time. By turns uplifting and funny, poignant and full of verve, DOLLBABY is a novel readers will take to their hearts.

“Doll, shut your mouth. Miss Ibby knows what I’m getting at.”
Doll rolled her eyes. “Maybe Rule Number Six should be don’t argue with Mama.”
“That’s an unwritten rule. Don’t need a number.”

“This flavorful and enthralling novel brilliantly captures New Orleans during the civil rights era. It’s a deeply personal tale about growing up and searching for family as well as a provocative exploration of race and kinship. I found it both thrilling and poignant.”
— Walter Isaacson, NYT’s bestseller of five books including Steve Jobs, Einstein: His Life and Universe, andBenjamin Franklin

“Laura Lane McNeal’s DOLLBABY is such an impressive debut—a powerful roux of family drama, long-simmering secrets and resentments, and ultimately, forgiveness and redemption. Deeply evocative, with memorable characters, DOLLBABY belongs on the keeper shelf along with The Help and The Secret Life of Bees.”
— Mary Kay Andrews, author of The Fixer Upper and Savannah Breeze

“In this tender coming-of-age novel, Laura Lane McNeal brings to life a place, an era, and an amazing cast of strong, larger-than-life characters. The heart-rendering story of Liberty Alice Bell’s journey of despair, hope, and triumph, and the colorful trio of women who helped her along the way, captivated me from the first page and lingered long after the last.”
— Cassandra King, author of The Sunday Wife, The same Sweet Girls and Moonrise 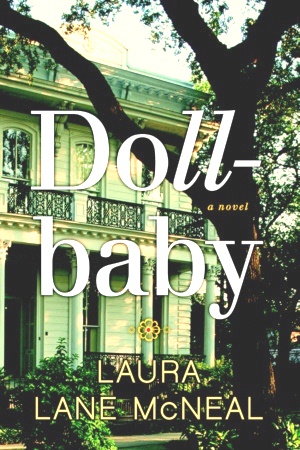