THE SONG READER by Lisa Tucker

Like most writers, I’ve always been fascinated with words, but growing up, we didn’t have many books. We didn’t even have magazines, but we always had a record player. My earliest relationship with words was through songs, and I’ve found that’s true for a surprising number of people. Whenever I tell someone what my novel is about, they invariably tell me something about their own musical history: the first album they owned; the first song they remember crying over; the first band they fell in love with because that band gave a voice to what they didn’t even know they were trying to say.

Of course music is called the universal language for good reason, since so often music seems to be the only way to express how we feel. A woman in love calls a radio station and asks that a certain song be played for her beloved. A couple stops arguing when he puts on the tune from their first date. Teenagers everywhere share their favorite songs in whispers with best friends, convinced that those songs will reveal who they are and what they believe. Our music is a crucial part of who we are, it’s true, but what if music could reveal parts of ourselves that even we are not aware of? This was the question behind “song reading.”

The idea first came to me about ten years ago, when I became interested in psychology, especially how memory works. I knew that music was one of the easiest things to remember: partly because of its repetition and partly because of something in our brains that responds to melody and rhythm. But we don’t remember every song we’ve ever heard, and when we do remember them, there’s often no obvious reason for that particular memory at that particular time. Why do we find ourselves humming an old sixties song one morning in the shower? Why do certain verses get stuck in our heads? Why do some songs keep coming back to us until they become almost a sound track for our lives?

Like Mary Beth Norris, the “song reader” in the novel, I set out to investigate the theory that the music people remember may say something important about them. Or to paraphrase Mary Beth: that music might be like a message from the unconscious, come to reveal us to ourselves. One of my early successes was trying to help a friend figure out why she didn’t want to marry her long-term boyfriend. I discovered that the songs she hummed when she was alone told a truth she wasn’t consciously aware of-she didn’t think this man truly respected her. Since then I’ve done lots of “song charts” for friends and family and found that people often express their deepest feelings through the music they can’t get out of their minds. And it doesn’t matter what kind of music. The lyrics of the most simplistic pop song can mean much more when integrated into the experience of the listener.

When I began the novel, I knew it would be about two sisters because my own sister has been so important to me. I also knew it would be set in Missouri, where we grew up. Otherwise, I was willing to follow the characters around and see where they wanted to take me. I’d been writing the book for a while when I realized a theme was developing about the family. The story is set in the early eighties, a time that brought a dramatic change in the way we see family. Some of the families in The Song Reader are what we would now call “dysfunctional,” a few extremely so, but Mary Beth’s little sister Leeann just wants to hold on to what little family they have left. Leeann’s search for their father is an important part of the novel. Though she knows he’s very damaged, she wants a chance to get close to him, a chance to have him in their lives. There are so many orphans in the book; I’m sure this is partly because our mother left when my sister and I were girls. The experience made us closer as sisters, but it also left us very aware of the fragility of even the most permanent of bonds.

Finally, if I had to give one reason behind this book, I would say that I wanted to write my own love song to the courageous efforts so many people make to understand their lives. Even though Mary Beth, my song reader, is very flawed, her struggle to see into the hearts of those around her is beautiful to me. The characters in the novel want to love and be loved; they want to find happiness despite suffering; they want to come to terms with their pasts. I hope that their voices can be part of the haunting melody of what has been lost in the heartbreak of living, and part of the chorus of possibility of what is still left to us all.

Lisa Tucker grew up in small towns outside of Kansas City and St. Louis, Missouri, and has toured the Midwest with a jazz band and worked as a waitress, writing teacher, office cleaner, and math professor. She has a graduate degree in English from the University of Pennsylvania, and a graduate degree in math from Villanova University. Her fiction has appeared in Seventeen and Pages, and is forthcoming in the music-inspired anthology, Lit Riffs. Music is a theme that runs through THE SONG READER, her first novel. Lisa Tucker currently lives with her husband and son in northern New Mexico. Her second novel, SHOUT DOWN THE MOON, about a girl singer in a band, will be published in spring of 2004. 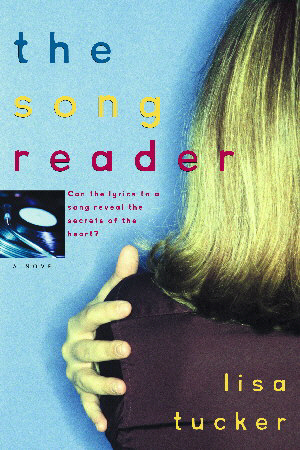