If Today Be Sweet

IF TODAY BE SWEET by Thrity Umrigar

It is the most enduring and beloved Parsi legend: Fleeing religious persecution in their homeland of Iran, a small group of Zoroastrians land on the shores of Sanjan, India, seeking political refuge. The local Hindu ruler eyes the foreigners warily, loathe to grant them entry. Unable to speak a common language, he takes an empty glass and fills it to the brim with milk. The symbolism is clear—the land is full and cannot accommodate newcomers. But the Zoroastrian head priest is up to the challenge. He drops sugar into the glass and dissolves it in the milk, careful not to spill a drop. His message is clear, also— if you let us stay, we will sweeten your local culture, without displacing or disrupting it. Thus, the Zoroastrians—or Parsis, as they came to be called—find a home in India and true to their word, become a model community, their contributions enhancing the culture of their new homeland.

This story, drilled into the head of every Parsi child, was part of my subconscious and became especially poignant after I came to the U.S. as an immigrant. For years, I had an ongoing fantasy which I was too embarrassed to share with friends: that somehow, someday I would do something large, grand—rescue a child from a burning house, maybe—to justify America’s faith in me, to thank America for taking a chance on me, to pay back a country that had taken in a confused, lost 21-year-old and shaped her into an adult. I wonder how many countless immigrants harbor some variation of such a fantasy in their minds.

But along with hopes and fantasies, immigrants also carry something else: they carry a hole in their heart. Along with the promise of a new country, there is the wound of giving up the comfort of the old; along with the excitement, the optimism, the belief, there is doubt and loss and mourning. The old saying is true—in order to gain something, you have to give something up. But this giving up is costly, hard, and extracts a price.

And in all the political debates about immigration, in all the easy, glib mythologies about America being a nation of immigrants, this loss, this toll, this terrible giving up, often goes unmentioned. The popular media focuses on what is gained: freedom, liberty, material wealth, opportunity, independence, the ability to recreate yourself. But here’s what is lost: identity, language, family, lovers, friends, pets, routines, hobbies, the names of streets you grew up on, the rhythms of your old neighborhood, your favorite family foods, the color of the sky at dusk. Sometimes, even your name.

In If Today We Sweet, I wanted to tell the story of Tehmina Sethna, a woman, who, because of circumstances she has no control over, is being asked to undergo the traumas of immigration. In middle age, she is being asked to give up everything that she once knew and called her own—home, hometown, neighbors, friends. Her son has gone through a similar process many years earlier but even he cannot help her. It is a journey she has to travel alone.

But while faced with the larger choice of whether to stay in America or not, Tehmina is confronted with another, more urgent choice: whether to live in America as a stranger or as a citizen. Citizenship implies connection, participation, joining in. Destiny beckons in the form of two young, troubled children next door. It is the plight of these two boys that forces Tehmina to chose. To decide whether she will forever straddle the fence, live in a no-man’s land. Or whether she will jump into the fullness of her new life in America.

Tehmina jumps. And in doing so, she fulfills the long-ago promise of her forbearers, to sweeten the life of the people in her new country, with her presence. The irony is that she expands the fabric of community in suburban America by stubbornly holding on to her own Indianness.

But Tehmina’s jump also lands her on the front page of the local newspaper and into celebrity culture. She is now a local hero as America accepts her with open arms.
The novel’s other theme is a tongue-in-cheek look at how the media shapes our culture. As an outsider, Tehmina has a lot to learn about how fortunes can turn on a dime in America.

If Today Be Sweet is about many things: it is a novel that celebrates family and community and critiques the sterility of suburban life and the tinsel of celebrity culture. But if it is about any one thing, it is about movement—about moving forward. And about the importance of getting off the fence. Of making a choice, taking a stand.

Tehmina learns this lesson in the end. America teaches it to her. 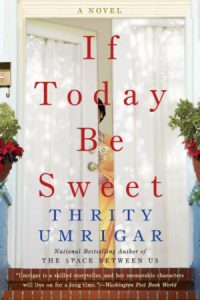