Tell Me One Thing

There have been times in my life when I’ve made major decisions without my conscious mind acknowledging them until well after the fact. When I began to write, I was working as a producer at Twentieth Century Fox, attempting to get other people’s screenplays made. One morning I awoke early to make some notes on a project and, to my utter astonishment, five pages of a novel seemed to leap into being. I remember getting up from my desk and vowing never to do that again. For someone who likes to be in control, the almost automatic writing I had just experienced was terrifying.

But every day before I left for the studio, I found myself getting up early and writing some more. I told no one. I wasn’t sure what was happening in those early morning hours, but I didn’t trust it. It was as if a stealth operative lived within me, pointing the way, and my task was to pay attention and follow. Only when I could hold the finished novel in my hand did I finally admit to myself I had become a writer. And although that early piece of work remains packed away in a cardboard box somewhere in our garage, it was the cork out of the bottle. Next I wrote an original screenplay and then another and my screenwriting career was launched.

A similar process began the night my daughter was born, the night I became intimately acquainted with grief. During the hours of her birth, something went wrong. To this day – and my daughter is an adult – we don’t have specifics.

None of the doctors who examined her during her three week stay in the neonatal intensive care unit were optimistic. Finally, we were told to take her home and see what developed. I put my grief away. I refused to let it define our future. Although it became the subterranean river that flowed beneath the life of our family, my conscious mind refused to give it purchase.
I had a child to raise. Contrary to almost all expectations, she turned out to be extraordinarily bright and spirited. But true to the most dire predictions, she could neither walk, speak, nor feed herself. I, also, had a new marriage to build and my career as a screenwriter to continue, the birth of my daughter following quickly upon the release of my first feature film. I continued working. It was a necessity, and in many ways it saved me.

The screenplay form can be demanding. It calls for a ruthless adherence to story through an unforgiving structure and it asks you to create memorable characters with a brush stroke. Attempting to master the craft is a humbling occupation. But like any challenge, it is also compelling. For many years I was captivated, struggling to honor the form and make something beautiful within it.
And then a curious thing happened. Just as I began to feel I knew how to do this well – inhabit the screenplay form and use it fully, expertly – I began to feel confined by it, as if I were bumping up against the perimeter walls and that what I wanted to write about, how I wanted to write, couldn’t be accommodated within the dictates I knew so intimately.

That’s when I started to write these eight short stories. Without consciously understanding it at the time, I needed to write more expansively, in a form that felt more elastic.
As this collection grew, so did my pleasure in writing these stories. I could write more personally. I could get inside the heads of my characters and tell you about them in ways that are unacceptable in a screenplay. I could write the small moments between people that often change lives. Oh, I felt like I could breathe deeply and stretch my arms.

But what I found myself writing about – without making a conscious choice to do so – was the emotion I had carried within me since that night of my daughter’s birth. It was time to listen to that stealth operative inside me – now, deal with the grief now. All the stories in this collection are linked through that emotion.
Jamie O’Connor in his three stories – Get Your Dead Man’s Clothes, Irish Twins, Aftermath – has made peace with his grief-ridden childhood, or so he thinks. The accommodations he’s made have rendered his adulthood meager and spare. It is only another dose of grief which propels him to his awakening.

Trudy Dugan in her three stories – Sweet Peas, What We Give, The Neighbor – has been freshly assaulted with the death of her beloved husband. For thirty two years she had been supremely happy with the status quo and then Fate intervenes and she has to begin her life all over again. How she manages that surprises her, but she ultimately embraces what she has never been able to – change.
Anna, in Wishing, learns about gratitude in the same moment she learns about grief. The man she will always love teaches her that.

And in Tell Me One Thing, Lucia and Maggie put grief away in favor of the familiar.

As I wrote these stories, I came to understand that grief is the starting point for my characters, but not the end point. There is something in each story about how this journey that no one wants to embark upon can be traveled. As a collection they hold out the hope that this trip can contain unexpected grace.

That’s what raising my daughter has taught me. From grief has come surprising gifts. From grief has come a life for all of us – my husband, my daughter, and for me – which contains laughter and delight. I have a daughter who holds so much joy within her that I often see her as the happiest person I know. Who would have thought it possible? Surely, not me.
And so, it is this mystery, this wondrous transformation, that I needed to write about in Tell Me One Thing. It is the hope that comes when we least expect it. It is the life we can create despite the grief we carry and sometimes, even, because of the grief we have experienced. 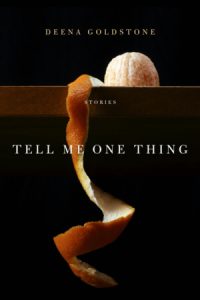