I am about to move again and am facing with dread the prospect of weeding out the bulk of stuff that I cannot take with me. Like Elaine in my story Another Little Piece, I am a compulsive archivist. It pains me to throw out anything – a thirty-year-old souvenir t-shirt from a rafting trip through the Grand Canyon, a paper plate covered in ribbons that I carried at my wedding rehearsal in place of a bouquet, the puppy collar belonging to a long-dead spaniel – there is no memento that doesn’t call up a memory or that might not be useful again. Even while I recognize the spiritual wisdom in the Buddhist’s non-attachment to material things, I am indiscriminately smitten with it all. What I imagine I will do with a set of oval flan dishes or the gray felt hat trimmed in ostrich feathers baffles even me, but someday they may come in handy.

I suspect this habit of thinking is shared by other writers of short stories. Our craft invites us to keep sorting through the heaped up past, plucking out small moments, and holding them up to see how they catch the light. I can look over these stories in CONFESSIONS OF A FALLING WOMAN and find scraps from my own life over two decades. Like the protagonist in What the Left Hand is Saying, I was once a young actress who lived in a fifth-floor walk-up in New York (just a few blocks from the offices of HarperCollins), and I had a roommate who was a puppeteer. I moved to Brooklyn, and that lovely apartment on Prospect Park later became the setting for Dan in the Gray Flannel Rat Suit. There actually was a burglar who broke in though the kitchen window, held my husband, Cliff, at knifepoint, and then thought better of it and left. Cliff, also an actor, was once hired to spend a day dressed in a rodent costume for a video game.

I hoard my own past but I also save shiny bits of overheard conversation and the mental refuse that other people have thrown away. I met a woman who told me that she and her siblings referred to their mother as the Queen Mother. I know nothing else about the woman or her mother, but her passing remark was the seed of The Queen Mother, a story set (for reasons even I cannot explain) in Baton Rouge where I spent one uneventful night on a six-month tour of a play. My only memory of Baton Rouge is the Howard Johnson’s, but that tour also took me to Sarasota, Florida, and the pelicans and purple theatre in that town made it into A Romance Manual. My former shrink, who bears some passing resemblance to the Buddhist shrink in The Bodhisattva, came back from Bangkok and described to me the difficulty of building a psychiatric practice in a culture that rejects notions of guilt. The green silk picture he brought back of Hanuman, the monkey general, is still here somewhere. A friend, who later died from a brain tumor, told me that one of the symptoms of the tumor was smelling burning rubber. Though there is nothing else belonging to Fred in the story Confessions of a Falling Woman, when I read it, I think of him.

However, more than any biographical details of character or setting or plot, what is most true about these stories is universal. There is a haunting poem by Elizabeth Bishop that begins “The art of losing isn’t hard to master.” She goes on to list the inevitable losses in one’s life, beginning with the innocuous – mittens and keys and so on – and escalating to the loss of places one has lived and people one has loved. For me, the loss of my grandmother’s memory to Alzheimer’s became the inspiration for my first novel. Bishop spurs herself to the end with the injunction “Write it!” These stories work that same ground, exploring what it means to move forward, always leaving something precious behind.

I went to the graduation last night of a goddaughter whose life Cliff and I have been privileged to share for nearly eighteen years. She is off to college in Ohio, we are off to Miami, and her parents are also moving to another state, so this may well have been the last of many evenings spent talking and laughing around a table together. A life rich with friends and family and interesting work is also, perforce, a life filled with losses. Even the most comic moments are recalled with a catch in the throat. If you are a writer, you save it all. 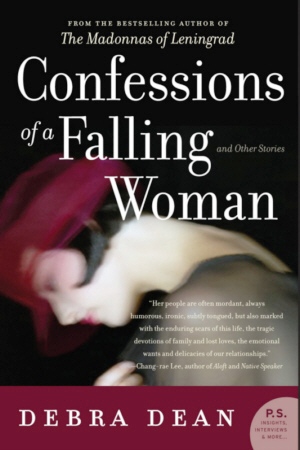 Story Behind the Book