My Name Is Mary Sutter

Southern Pines Pilot – April 26, 2011
Sometimes a reader is fortunate enough to pick up a book so full of vivid characters, which so thoroughly transports them to another time and place, that when they finally put the book down they have an overwhelming sense of loss.
“My Name Is Mary Sutter” is just such a book. Robin Oliveira’s meticulously researched novel feels authentic from the opening scenes in 1861 Albany, N.Y., to the horrific conditions she encounters during the war years in Washington, D.C….
While superbly researched, the history never overwhelms the story. Mary’s voice is clear and resonant, and the novel never loses its power to capture Mary’s unrelenting determination or the horror of war.

Atlanta Journal Constitution – August 8, 2010
Historical tale among best.
“At the center of Robin Oliveira’s enthralling and well-researched debut novel is an ambitious young woman who refuses to accept the limited roles women played in the field of medicine during the mid-19th century. …In her hometown of Albany, NY, 21-year-old Mary Sutter is a midwife of unsurpassed skill, so well-known that women ask for her by name. But for headstrong young Mary–whose bookshelves includes “Gray’s Anatomy,” Florence Nightingale’s “Notes on Nursing” and “The Process of Parturition”–what she’s already good at isn’t enough. She dreams of becoming a surgeon, something virtually unheard of in April 1861. So, despite being coldly rejected by the local medical college and turned down by a doctor as an apprentice, she keeps knocking on doors in hopes of finding her chance…”

Oprah (O) Magazine – June 15, 2010
The title of Robin Oliveira’s debut historical novel, My Name Is Mary Sutter, perfectly evokes its eponymous heroine’s style: clear, determined, and, unlike most women of the Civil War era, unapologetically direct. Expected, at most, to follow her mother into local midwifery, Mary has the nerve to want to be a “real” doctor. (“No woman is a surgeon,” chides even her admiring twin sister, Jenny.) When Mary’s beloved, Thomas, devastates her by choosing the more conventional Jenny as his wife, Mary sets out for Washington, D.C.; perhaps there she can heal herself as well as those wounded in war. Her heartbreak may have given her compassion equal to her excellent medical skills—both of which endear her to two male surgeons along the way—but Mary (who’s nothing if not plucky) struggles mightily to achieve her dream. When news of her good works in a D.C. hospital finally wins her a meeting with President Lincoln, he declares: “I have more faith in that young woman than I do in most of my generals.” We, of course, felt that way about Mary all along.
— Sara Nelson

Historical Novels Review – Editors’ Choice – May 1, 2010
“… The relationships between Mary and her family members, her mentor, and others she meets are exceptionally well done. This unforgettable novel of the American Civil War should become a classic. I highly recommend My Name Is Mary Sutter to readers who wish to gain a better understanding of the war and its effects on those who lived through it.”
— Jeff Westerhoff

Booklist – April 15, 2010
Oliveira’s graceful, assured portrayal of a courageous woman shines through in her outstanding debut novel. Mary Sutter’s expert midwifery skills are renowned throughout Albany, New York, in 1861, yet she yearns for more. After local physicians refuse to formally train her in medicine, and her hoped-for husband chooses her twin sister instead, she heads south to Washington, D.C., bringing only a valise and her singleminded ambition. Mary runs into prejudicial roadblocks even there but gains acceptance as a charwomanturned-nurse at the Union Hotel hospital. While caring for wounded, disease-ridden soldiers under appalling conditions, she persistently ignores family pressures to return home. The viewpoint shifts between Mary, her family members, two doctors who come to love her, and real-life figures like Lincoln and Dorothea Dix, ensuring an intimate yet wide-ranging portrait of the chaos, ineptitude, and heartbreak of wartime. Oliveira has a firm grasp on the finer details of the era and lets readers form their own judgments about the painful decisions made by her appealingly vulnerable characters. This impressive historical epic deserves a large readership.
— Sarah Johnson

Publishers Weekly – February 15, 2010
The Civil War offers a 20-year-old midwife who dreams of becoming a doctor the medical experience she craves, plus hard work and heartbreak, in this rich debut that takes readers from a small upstate New York doctor’s office to a Union hospital overflowing with the wounded and dying. Though she’s too young for the nursing corps, Mary Sutter goes to Washington, anyway, and, after a chance meeting with a presidential secretary, is led to the Union Hotel Hospital, where she assists chief surgeon William Stipp and becomes so integral to Stipp’s work she ignores her mother’s pleas to return home to deliver her sister’s baby. From a variety of perspectives—Mary, Stipp, their families, and social, political, and military leaders—the novel offers readers a picture of a time of medical hardship, crisis, and opportunity. Oliveira depicts the amputation of a leg, the delivery of a baby, and soldierly life; these are among the fine details that set this novel above the gauzier variety of Civil War fiction. The focus on often horrific medicine and the women who practiced it against all odds makes for compelling reading. (May) 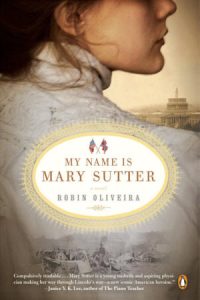