Chicago Sun Times – May 6, 2007
“A new memoir detailing everything from an Afghani bikini wax to the war-torn nation’s gender politics. It’s Rodriguez’s witty and blunt unpretentiousness coupled with her affections for Afghanis that makes her story infectious and charming. She doesn’t pretend to have all the answers…Rodriguez’s story is also full of heartbreak; detailing a world where many girls are forced to marry as young as 12. It’s clear her heart belongs to her ‘girls.’” – Rummana Hussain

The Washington Times – April 29, 2007
“The story Ms. Rodriguez tells in this remarkable book is transfixing and often harrowing. Written with Kristin Ohlson, a writer, it is a memoir notable for its directness and humor. Without being mawkish or sentimental, Ms. Rodriguez gives an account of a very brave mission that overflows with generosity. This is anything but the just-another-me-me memoir it could have been. Her eye stays trained on the numerous Afghan women.” – Carol Herman

Missourian – April 28, 2007
“Rodriguez’s engaging memoir, Kabul Beauty School, [displays] curiosity, pluck, an abiding love of dishy gossip and a warm bond of sisterhood with the women of her adopted country. The heart of Rodriguez’s book is her relationship with the women she befriended in the beauty academy… The stories of the women, who are given pseudonyms in the book to protect them, are a troubling and fascinating snapshot of life in today’s Afghanistan. Even when she pokes fun at herself as an incorrigible “loudmouth,” Rodriguez says she believes she is speaking up for Afghan women in a way that they have not been able — so far — for themselves.” – Laura King

Christian Science Monitor – April 24, 2007
“In Kabul Beauty School, Rodriguez (with the help of coauthor Kristin Ohlson) tells the utterly improbable but also genuinely moving story of how she traveled to Afghanistan to help after 9/11 and ended up with an Afghan husband and a commitment to train Afghan women to become beauty salon operators. Somehow Rodriguez, who certainly has the hairdresser’s gift for entertaining and confidential gab, manages to make it all seem almost reasonable. Perhaps best thing about Rodriguez is her refusal to either patronize her beloved Afghan students (whose heart-rending stories are woven throughout the book) or to drape herself in too much of a hero’s mantle.” – Marjorie Kehe

People Magazine (Four Stars, Critics’ Choice) – April 16, 2007
“A Michigan hairdresser trying to escape her abusive husband, Rodriquez volunteers for disaster relief training in 2001 – and winds up in Afghanistan after the fall of the Taliban. This lively memoir is full of darkly funny moments – a customer who had never seen a blow dryer thinks it’s a gun and runs screaming from the salon chair – and the humor leavens the horror stories about life in the war-torn land. A dishy but substantial read.”

New York Times – April 13, 2007
“Kabul Beauty School is the rollicking story of one of the strangest foreign-aid projects ever conceived… There’s a lot of crying and a lot of laughing, but Kabul Beauty School transcends the feel-good genre largely because of the author’s superior storytelling gifts and wicked sense of humor. As the Afghans learn about makeup, their teacher learns about them. She begins to suspect, shrewdly, that the Taliban closed the country’s beauty salons not because they made women look like prostitutes… ‘but because they gave women their own space where they were free from the control of men.’ Ms. Rodriguez fights back, American-style. The victories are sweet.” – William Grimes

USA Today – April 12, 2007
“Rodriguez’s memoir is more than a story of empowerment. It’s the story of real women struggling to survive emotionally and physically in a male-dominated culture. There are tales of women locked in their homes, beaten and starved, with no hope for a happy life. Equally fascinating is the fiery Rodriguez’s own story. She became so enamored of Afghan culture that she agreed to an arranged, traditional Afghan marriage. The maturing of this tempestuous new relationship is fascinating, and Rodriguez tells her own story in a lively and honest fashion.” – Carol Memmott

Los Angeles Times – April 10, 2007
“Kabul Beauty School” is laid out masterfully, pulling readers in from the very first page. We see the tenacity, intelligence and wiliness that will be the touchstones of Miss Debbie’s character as she tries to get this pie-in-the-sky beauty school idea off the ground; we also experience intimately the culture in which she finds herself and the daily constraints that women in Kabul face. Though not a heavy read, “Kabul Beauty School” is composed of heartbreak, hope, poignancy and candor. Rodriguez introduces a culture that will be foreign to many readers, but then proves that obstacles can be overcome when they’re approached with the unshakable belief that they must be.” – Bernadette Murphy

The Plain Dealer – Sunday, April 08, 2007
“Kabul Beauty School should come packaged with a cheese cake. It’s that well suited for book clubs. The revelation in the pages is the way Rodriguez shows a nation where women are prized for their virginity above all, but where innocence is a distant memory. It is the insight of an outsider, but no less true because of it. Rodriguez ends her book no more hopeful about Afghanistan’s future than the day she arrived. But she has no regrets over all she has invested. Reading Kabul Beauty School is not a bad investment of time, either.” – Janet Okoben

VOGUE Magazine – April 2007
“Kabul is a city of armored compounds and clouds of dust. But for Deborah Rodriquez, author of the big-hearted Kabul Beauty School, it’s rare and arresting bursts of color that better define the place. A fiery-haired, outspoken American and trained beautician, she arrives in Afghanistan as an aid worker only to find her truer calling in helping to found the beauty school for Afghan women. In this inspiring work, Rodriquez recalls how she comes to make Afghanistan her home, wed a Mujahid, and bring beauty into a war-torn land.” – Megan Conway

Booklist – February 15, 2007
“Riveting from the start, Rodriguez’s account tells the story of one Michigan woman’s quest to help women in Afghanistan after the fall of the Taliban the best way she knows how: by opening a beauty school. Refreshingly charismatic and gossipy, Rodriguez’s voice is endearingly unguarded, just like that of a chatty hairdresser. The women she meets are described in loving detail… Rodriguez’s are Western eyes, and it is easy to imagine an Afghan woman being offended by some details she divulges, but underneath the culture clash is genuine care, respect, and juicy storytelling.” – Emily Cook

Publishers Weekly (Starred Review) – December 18, 2006
“A terrific opening chapter – colorful, suspenseful, funny – ushers readers into the curious closed world of Afghan women. A wedding is about to take place, arranged, of course, but there is a potentially dire secret – the bride is not technically a virgin. How Rodriguez, an admirably resourceful and dynamic woman, set to marry a nice Afghan man, solves this problem makes a great story, embellished as it is with all the traditional wedding preparations. This witty and insightful (if light) memoir will be perfect for women’s reading groups and daytime talk shows.”

Kirkus Reviews – December 15, 2006
“A lively narrative of the author’s experiences reacquainting Afghan women with skills the mullahs had denied them. Michigan-born Rodriguez… embarked on a mission to start a beauty school in Kabul. Living on and off in Kabul, Rodriguez found a suitable building and opened her school to about 30 students, whose hardluck stories fill these pages. Today, she writes, ‘I’ve been renewed by the spirit of this place and roused by its challenges.’ Terrifically readable, and rich in personal stories.” 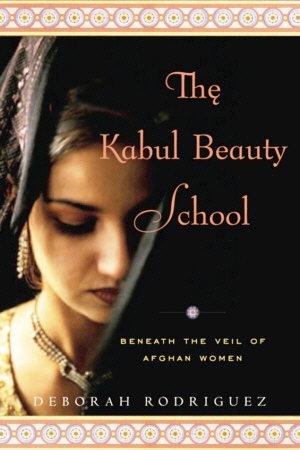