Atlanta Journal Constitution – Sunday March 11, 2012
“In Jonathan Odell’s storytelling tour de force, “The Healing,” a former slave offers hope to a troubled child by weaving a remarkable tapestry of plantation life on the eve of the Civil War… a master class about a group of women who seem to have disappeared from the history books: slave doctors, once the most powerful slaves on the plantation. In addition to their knowledge of herbs, midwifery and home remedies, they offered a vital curative the white doctors of the day left out. They treated their patients like human beings. Polly Shine carries something even more potent in her medicine chest, a subtle message that the master’s most loyal slave is the first to notice. “She’s doing more than tending to their bodies,” he warns. “She’s meddling with their minds. If the master’s not careful, this tale that’s being brewed will let loose a plague among his slaves a lot more dangerous than the cholera or the blacktongue or the yellow fever.””

The Herald (Madison, MS) – March 6, 2012
“…The Healing is a treasure; a gift of humble proportions that spreads its warmth through the reader’s soul long after it’s finished.”

“Set in the darkest heart of plantation-era slavery, “The Healing” is a remarkable rite-of-passage novel with an unforgettable character, a forceful medicine woman named Polly Shine. She arrives in the life of Granada, a black slave girl who was robbed of her mother as a baby and is struggling to find her racial place and identity on a sprawling Mississippi Delta plantation in the decade leading up to the Civil War. Her personal journey takes fearsome turns in the hands of Polly Shine. …[the book] transcends any cliches of the genre with its captivating, at times almost lyrical, prose; its firm grasp of history; vivid scenes; and vital, fully realized people, particularly the slaves with their many shades of color and modes of survival…”
— Kendal Weaver
(This was syndicated and published in many major newspapers across US)

New York Post – February 18, 2012
“With his latest work, Odell has written one of those beautiful Southern tales with unforgettable characters. Required reading.”

Star Tribune (Minneapolis) – February 10, 2012
“This is a beautiful book, well crafted and textured. It combines the historical significance of Kathryn Stockett’s “The Help” with the wisdom of Toni Morrison’s “Beloved.” There are few characters in literature as compelling and compassionate as Polly Shine, who teaches us to ‘choose for the people … and God will be on your side. Choose for yourself and you’ll be walking alone.’”
— Christine Brunkhorst

Historical Novel Review – February 1, 2012
“…The Healing is Jonathan Odell’s beautifully written historical novel of denial and acceptance set in the antebellum Deep South. Every character struggles with the agonizing lies and realities on both sides of the master-slave relationship. Those emotions still reverberated during Odell’s boyhood days in Mississippi amid segregation, lynchings, and the KKK.
In writing The Healing, Odell sought to understand slavery’s terrible consequences and also the fractured society in which he was raised. Just as the power of story helped patients that Polly Shine healed and brought Granada to accept herself, Odell’s story will touch his readers, and I sensed that he found healing in his own words. Odell’s lush descriptions set me in the Mississippi Delta so clearly that I could feel the humidity and hear the mosquitoes whine. His characters, particularly the richly-drawn Polly Shine, will haunt you long after you finish The Healing.”
— Jo Ann Butler

Kirkus Reviews – January 15, 2012
“Odell (The View from Delphi, 2004) stirs lyricism and sentiment into a well-researched epic of slavery and emancipation that will endear itself to the spirituality inclined.”

Library Journal Starred Review – October 1, 2011
“The white, male, Mississippi-born author (The View from Delphi) of this engrossing novel about an African American female healer growing up as a slave on a Mississippi plantation makes up in soulfulness for whatever he may lack in authenticity. Gran Gran, the healer, an old woman by 1933, isn’t called on much anymore for midwifery or folk remedies when a newly motherless girl is abandoned at her door. By vividly relaying stories about people she loved as a child—especially Polly Shine, the courageous slave woman healer/midwife who taught her to use her own gift—Gran Gran brings traumatized, grieving Violet back to the land of the living. Recalling Polly Shine’s blend of African traditions and Old Testament beliefs heals her own ailing soul as well. VERDICT Bound to be compared to Kathryn Stockett’s best-selling The Help, this historical novel relegates its few white characters to distinctly minor status and probes complex issues of freedom and slavery, such as the dangers of an owner’s favor, making it more like Dolen Perkins-Valdez’s acclaimed Wench.”
— Laurie A. Cavanaugh, Wareham Free Lib., MA 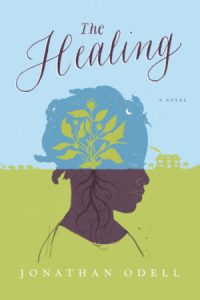