The Philadelphia Inquirer – April 26, 2009
Art and power define the life of the very real Fra Filippo Lippi in this fictional work by Laurie Albanese, a novelist, and Laura Morowitz, an art historian… They make Lucrezia a genuinely sympathetic character, rather than solely a victim or a cipher… The secondary characters are many and well-written.

Library Journal – January 29, 2009
A well-narrated account of the forbidden love between the Renaissance painter-monk Fra Filippo and his model, Lucrezia Buti, served up with hefty portions of political intrigue, Italian-style. Recommended to fans of Tracy Chevalier’s Girl with a Pearl Earring and historical fiction collections.

Booklist Online – December 16, 2008
Novelist Albanese (Lynelle by the Sea, 2000) and art historian Morowitz collaborate on this richly textured Renaissance romance. Drawing on the legendary relationship between painter and Carmelite monk Fra Filippo Lippi and beautiful Augustinian nun Lucrezia Buti, the authors have fashioned an irresistibly passionate novel steeped in art, history, and the miracles wrought by love. Caught up in political and spiritual forces beyond her control, model, muse, and reluctant novitiate Lucrezia embarks upon on a remarkable emotional and artistic odyssey. When the lovers become entangled in a double-edged scandal involving their relationship and a holy relic, their faith is tested but ultimately rewarded. This atmospheric view of Renaissance culture and religion will appeal to fans of Tracy Chevalier and Susan Vreeland.
— Margaret Flanagan

Publishers Weekly – October 13, 2008
“This novel based on the life of painter Fra Filippo Lippi will be lapped up by fans of historical romance… In the year 1457, Lippi, a Carmelite monk in Prato, spots the lovely Lucrezia Buti and wants to use her for a model for his paintings and frescoes. Lucrezia’s visits to the painter’s bottega are misinterpreted by the convent’s corrupt and powerful prior general, with irreparable consequences for the girl.” 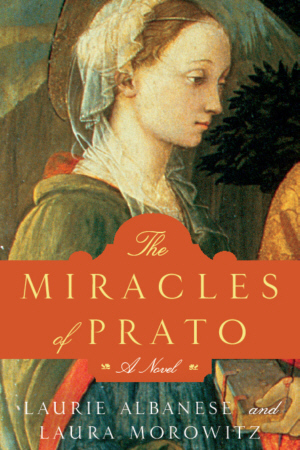