New York Times – April 3, 2012
“…If ‘Dreaming in French’ often seems like elegant grasping, there are few writers whom I’d rather grasp along with. Ms. Kaplan’s prose is inquisitive and supple; she’s never less than good company. …’Dreaming in French’ is itself a dreamy book, in ways both fuzzy and clarifying. It is always eloquent, however, about one thing: Learning a foreign language, as Bouvier put it, ‘doubled life’.”

Salon – March 26, 2012
“Superbly perceptive… …Tracing the effect of an unlived fantasy on a person’s actual life is a delicate operation, but then so is accounting for the influence of that first immersion in a foreign country. Kaplan writes of her subjects that ‘the deep history of their transformation involved smells and tastes and visions — fleeting sensual experiences not easy to capture in a conventional life story.’ An eccentric landlady or the first sampling of couscous can make an indelible impression on a sensibility cast wide open by travel, an impression that can in turn color ideas and feelings for decades to come. No, it’s not easy to capture such things, but Kaplan proves that it can be done.”
— Laura Miller

Publishers Weekly Starred Review – February 6, 2012
“This is an enduring group profile of three influential yet completely different American women, for each of whom Paris played a short but transformative role, over three tumultuous decades. Jacqueline Bouvier—who would become Vogue’s It Girl and then, in Kaplan’s words, “the eternal First Lady”—found in 1949 Paris the aesthetics, pleasures, and discipline that would serve her all her life. In 1957, Susan Sontag hit the Parisian ground running from her husband and five-year-old son in America to imbibe the freedoms of Europe. On hand during the breakdown of the old colonial dispensation, Sontag would even be buried in Paris. Angela Davis, like Miss Bouvier, traveled with a student group. In a French resort shortly before reaching Paris, on a late-summer day in 1963, she learned of the Baptist Church bombing in Birmingham, Ala., her hometown. Her ever-increasing radicalization back in the U.S. was applauded by myriad French intellectuals. The much-admired Kaplan (French Lessons: A Memoir) focuses sharply on three women of successive generations, providing a keen feminist-cultural picture of Paris’s enduring, if varied, impact.” 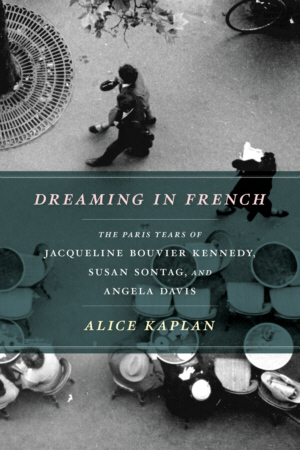