Seattle Times – September 8, 2012
“In her excellent second novel, “The Mirrored World,” Debra Dean has composed a resonant and compelling tale from 18th-century Russia, based on the historically true story of Xenia, later Saint Xenia of St. Petersburg…
…Dean’s writing is superb; she uses imagery natural to the story and an earlier time. For example, the young Xenia and her chorister are so infatuated and oblivious to all around them that they “banked like billiard balls off the other dancers.” Their conversations are “studied like egg whites” by their guardians…
…Dean resurrects this beloved saint in Russian history who cared for the poor, juxtaposing the crudest poverty and extravagant displays of wealth in a mesmerizing, spare style. The gross social inequality is a vivid setting for the immanent love and poignant spirit of compassion in those who stay connected to the poor and the mad in ways that have social relevance today.”

Bookpage –  September 1, 2012
“Is there any setting more exotic—or enticing—than 18th-century Russia, populated as it is by finicky empresses, brutish tsars and decorated soldiers of the royal court? Best-selling author Debra Dean, previously heralded for The Madonnas of Leningrad, imagines the life of Russia’s beloved “holy-fool” Xenia, breathing life into the now-revered woman who became the patron saint of St. Petersburg.”

Miami Herald – August 24, 20012
“Dean, author of the critically acclaimed The Madonnas of Leningrad and the short story collection Confessions of a Falling Woman, writes with an internal focus and a wistful grace that suit the subject and the time period. In her skilled hands, history comes alive. You can almost hear the sleigh bells tinkle and the sled’s runners squeaking through the snow as the minarets and domes of St. Petersburg appear on the horizon.
But even though the setting is romantic, the writing is far from sentimental. Dean’s portrayal of the cut-throat court life is fascinating — the casual cruelty of the powerful, the glittering excesses, the intricate rules for proper behavior…
In The Mirrored World, Dean takes the bare framework of an extraordinary life and weaves an absorbing and intimate story of devotion around it. Though the world she creates is harsh and cold at times, it is the warmth at its center — the power of love — that stays with you in the end.”

Booklist – August 1, 2012
Dean (The Madonnas of Leningrad, 2006) returns to Russia with a concise yet inspiring look at its beloved St. Xenia. Even as a child in 1730s St. Petersburg, Xenia Grigoryevna acts like she doesn’t quite belong to this world. She collects odd artifacts, ignores court etiquette, and predicts events with uncanny accuracy. She marries imperial singer Andrei Feodorovich in a love match, but her mind becomes unhinged after overwhelming tragedy, and she gives away nearly everything she owns to beggars without regard for her welfare. Her cousin Daria tries but fails to help her, and Daria ultimately finds her own life transformed by Xenia, who is found wandering the streets as a holy fool. Vivid historical examples reflect the story’s prominent substance-versus-illusion theme, such as Anna Ioannovna’s magnificent, cruel ice palace and Empress Elizabeth’s cross-dressing “Metamorphoses” ball. Similarly, Xenia’s poverty and selflessness counterpoint Catherine the Great’s opulent court, like “the pattern on the backside of a tapestry” that exists but remains invisible. Dean’s novel grows more profound and affecting with every page.
— Sarah Johnson

Publishers Weekly – July 30, 2012
In her second novel (after The Madonnas of Leningrad), Dean returns to Russia to reimagine the intriguing life story of St. Xenia, as seen through the eyes of the fictional narrator, Dashenka. A terrible fire in 1736 in St. Petersburg forces a young Xenia; her sister, Nadya; and their mother to seek refuge in Dasha’s childhood home. The girls grow up together and are ushered into society the same year. Soon after, Xenia falls in love with Col. Andrei Petrov and the two wed. Dasha is not so lucky, but is kindly welcomed into Xenia’s house, where she witnesses Xenia unravel, first over her difficulty in conceiving, then the deaths of her only baby and husband. When an unstable Xenia begins to relinquish her worldly possessions, Dasha becomes concerned, and Xenia suddenly disappears, only to resurface years later as a saint to the poor—much to the chagrin of the royals. For those familiar with the story of St. Xenia, this is a gratifying take on a compelling woman. For others, Dean’s vivid prose and deft pacing make for a quick and entertaining read.

Library Journal, July 1, 2012
“Dean made a skyrocketing literary debut with The Madonnas of Leningrad and follows up with a meditative spiritual saga that honors its subject with an artful recreation of Xenia’s era. Subtle period details and dramatic facts of the 18th century enliven this fictional biography though the stories move along at a stately processional pace.” 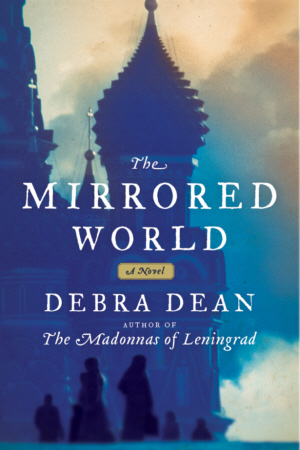