Christian Science Monitor – December 15, 2020
“…lyrical new memoir… her stories are vivid and hopeful, with beauty and conviction – and, especially, bravery – outweighing despair.”
[CSM lists Dancing in the Mosque as one of the The-10-best-books-of-December-2020 and here is the full article: https://www.csmonitor.com/Books/Book-Reviews/2020/1215/A-life-unconquered-by-Taliban-rule-in-Dancing-in-the-Mosque

Kirkus Reviews – October 1, 2020- Starred Review
A powerful narrative of a life marked by courage and despair.
In a riveting memoir, Qaderi recounts her life story for the son she left behind in Afghanistan. When she refused to accept her husband’s taking a second wife, he divorced her, taking away their 19-month-old child. “Every day I regret my decision to leave you,” she writes in a moving testimony to her love. The author was a young girl during the brutal Russian occupation of Afghanistan; two years after the Russians left in 1989, Afghanistan got engulfed in a bloody civil war that ended only when the Taliban rose to power in 1995. Suddenly streets were filled with “young men with beards and long hair and kohl eyeliner…tall and thin as if they had been starved for years.” They instituted Sharia law, closed girls schools, and forbade reading; those who disobeyed were publicly whipped or worse. Describing herself as a troublemaker, Qaderi rebelled, daring to home-school girls when she was 13 and soon secretly teaching girls, boys, and even two young members of the Taliban within a mosque. It was there that one of her students taught her to dance—at the risk of all their lives. Boldly, Qaderi managed to set up a writing class under the guise of learning needlework. Merely being female made her physically vulnerable. She was twice sexually harassed, once by a lewd religious leader. Taliban men often forced young girls to marry them, a fate she feared. At the age of 17, her family considered her lucky to marry a local man, and she was taken to live with his family in Tehran. There, women’s freedom amazed her. “In Iran,” she writes, “a good woman could be an independent and educated woman.” Married for 15 years to a husband she grew to love, and who supported her accomplishments, she was shocked when, after they returned to Kabul, he announced that he would take another wife—an act she could not abide.
An unvarnished, memorable portrayal of a mother’s grief and love.

People Magazine – Book of the Week – December 12, 2020
An Afghan women’s rights activist shares the sweeping story of her life, from growing up in war-torn Afghanistan to coming of age during the rise of the misogynist Taliban and ultimately becoming a professor and writer in the United States. Weaving together memories and bittersweet letters to the son she was forced to leave behind, Qaderi reflects on gender, displacement, tradition and loss.
A heartrending, indelible tale. 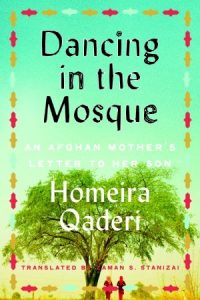