Bookpage – March 2018
“At the center of it all, the disappearance of the “winter sisters” continues to captivate Albany’s residents, from prostitutes and police to lumber barons and society matrons. Allegations swirl, and the truth eventually proves stranger than anyone had imagined-or feared.”

Historical Novel Society, February 1, 2018
“In Robin Oliveira’s follow-up to My Name is Mary Sutter, it is fourteen years after the Civil War, and Albany, New York, is besieged by a massive blizzard. Two young girls, Emma and Claire O’Donnell, wait at their school as they watch other kids being picked up by their parents. What they don’t know is that their parents have become two victims of the blizzard. When no one shows, the sisters start for home.

“When the girls go missing, Mary Sutter—friend of the O’Donnell family—and her husband, William, begin a frantic search for the girls. They search everywhere, but after six weeks, the police declare the girls dead and encourage Mary to do the same. But nothing stays hidden by snow forever. When the snows melt and the river thaws, a flood rages through Albany, and after treating the injured, Mary and William return home and discover what happened to the girls. What follows is a horrific tale that concludes in a trial that strains the city of Albany and budding relationships and loves.

“Winter Sisters is a critical look at the historical roles and values of women in the late 19th century. While the who-did-it aspect of the book is fairly easy to flesh out, the real charm of Winter Sisters is story of family, love, and perseverance, and the commentary on how women were and still are treated in society. Readers may find the first portions of the book a tad slow, but as the story wends its way to the trial, the pace picks up and tensions rise. Populated with strong female characters and an oft-lyrical prose, this is a definite must read.”

—Kirkus Reviews, January 2018 starred review
“Oliveira crafts a complex, multifaceted historical novel that is both a captivating story and a commentary on the laws that have, for far too long, oppressed and endangered women. . . . Entertaining at times, deeply political at others; a perfect example of a historical novel that also illuminates present-day issues.” 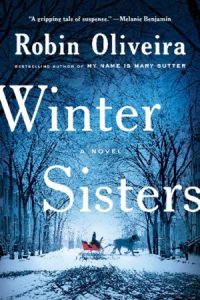