I have now read, with an accelerating sense of astonishment, every stupefying word of Tova Reich’s My Holocaust, and have been mentally rehearsing how best to express my conviction that this is a novel before which one ought to fall on one’s knees. Put it that Philip Roth’s merited status as our most acerbic contemporary American satirist melts away in the blaze of Tova Reich’s burning brand. In My Holocaust (aha, the title alone!), she is ten times wickeder than Roth, a hundred times wilder, and his sharpest jabs seem in comparison no more than the irritable umbrella-pokes of a meek little old lady in a lace cap, faint-heartedly peering into her reticule to pluck out a complaint. In Tova Reich’s unafraid boldness, in her heroic recklessness, there is something to offend everyone and everything, every preening and every piety. Nothing and no one ’scapes whipping — not even the institutions and persons one might most wish, for fear of public opprobrium, to spare.

Here is a novel that cuts, cuts, cuts: it is satire, caricature, comedy, farce; it makes you laugh and wince, often simultaneously; it judges and condemns; but it also clears away cant and pomposity and fakery. And much more than merely cant and pomposity and fakery: it accuses the prevailing tone of American society, a cultishness cultivated from the top down — the cult of rivalrous victimization, celebrated among the humanities in all American universities, from women’s studies to black studies to postcolonial studies, from literature departments to history departments to Middle Eastern departments, all those braggart elitist realms where grievance and suffering are crowned with laurel.

Tova Reich’s verbal blade is amazingly, ingeniously, startlingly, all-consumingly, all-encompassingly, deservedly and brilliantly savage. All the same, she doesn’t lecture or scold; her language is not that of a moralizing jeremiad. It is (seemingly) as detached as any of the natural disasters our planet has lately endured: with the force of a tsunami, a flood, an earthquake, it rolls over what human hands and minds have made of civilization. She is Dean Swift’s Jewish sister; but poor deprived Swift had only human nature to deal with. Reich has what Swift, that unlucky goy, lacked, and (even with all his mammoth pessimism) could not have imagined: Reich has the Holocaust — or, better yet, the Holocausts, since, as she elucidates, everyone covets his or her own supremely desirable Holocaust. Her deadpan riffs and ironies, those long cresting waves of shocking wit, wash over egotism, greed, envy, falsehood, corruption, exposing their bones and stones without mercy. And still w e laugh. There is no cranny of American crank culture (or couture) that is invulnerable to Reich’s skewer. Her several fantastically imagined rosters of all the possible copycat Holocausts that our competitive American spirit has devised are outdone only by reality.

Tova Reich’s My Holocaust is a ferocious work of serious satiric genius. I believe it to be one of the most penetrating social and political novels of the early twenty-first century, next to which the last century’s Animal Farm is a mere bleat. Its publication is certain to raise a howling hullabaloo; but if there was ever a hullabaloo worth raising, this is the one. Yet this extraordinary writer’s intent is the very opposite of destructive. She shows us how the temple of Holocaust memory has been defiled. She means to cleanse the temple. 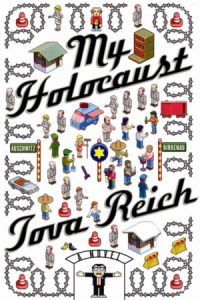