A conversation with William Lychack

The Wasp Eater is your first novel. How did the idea for the book originate, and how long were you at work on it?

I never knew my father — I met him twice before he died — so I imagine a part of me wanted to somehow spend some time with him. The novel grew into a kind of search for him, but it started out as an attempt to understand all of my mother’s unresolved feelings for my father, as well as to tell and honor her story. I eventually came to understand that I had my own deprivations that were compelling me to write.

Surely it must be true, as someone has said, that the longer you work on something, the less likely you are to finish it. Off and on, The Wasp Eater took about twelve years to complete. I should add that this isn’t something I’m terribly proud to tell people, nor is it something I’d ever wish on anyone, but I did seem to care an awful lot about the people in the book. I suppose I still do.

The fictional family has a rather unusual surname, Cussler. How did you choose it?

For as long as I can remember, Clive Cussler has been my mother’s favorite writer. His hero Dirk Pitt is still a kind of gold standard for her, a male ideal that exists somehow beyond the pages. In fact, the night before my wife and I got married, my mother delivered the most memorable line of the weekend. “Every woman,” she said, “needs a Dirk Pitt in her life.” As a kind of wink to her, when it came time to name our family in my novel, I gave them the last name Cussler, as if giving her the Dirk Pitt she deserved.

Now, this is what I tried to explain to Clive Cussler when he called one day and asked where I’d gotten the name — his name — for the family in my book. It was a completely unguarded five or ten minutes on the phone to Arizona. We talked a little about shipwrecks and seasickness and perhaps meeting for coffee one day as we said goodbye.

I called my wife, my editor, my agent, my editor again. And then, of course, I called my mother. “Hey, Mom,” I said, “you’ll never guess who called this afternoon — he wanted to know where I got the name Cussler from.”

I don’t believe my mother ever once said something like that in her life, but there it was, her voice so unhinged in a wonderful and strange way: “My, oh my!”

About an hour later, the phone rang again. “And what did he sound like?”

“Like a gentleman,” I told her, “his voice kind of soft and patient, a little like Burl Ives.”

Have any authors or literary works in particular influenced your writing?

William Maxwell was a great model for me as I wrote this book, especially two of his novels: So Long, See You Tomorrow and They Came Like Swallows. The first was a touchstone for language and tone, the second for emotion. I always kept Virginia Woolf’s To the Lighthouse and Marilynne Robinson’s Housekeeping and pieces of Larry Woiwode’s Beyond the Bedroom Wall and James Agee’s A Death in the Family close at hand, just as I always had a handful of short pieces around me: “Barn Burning” by Faulkner, “First Love” by Nabokov, and “Ghost and Flesh, Water and Dirt” by William Goyen. But to be honest, the only real rival to Maxwell was a film, My Life As a Dog, which captures the same tone and feeling perfectly.

I was obviously affected by stories that were prefigured by early death and loss. It was unconscious, but I suppose I found models whose tone spoke to me and helped me find my own voice. I could never say my own work is comparable to any of these, but on my better days I’m hopeful. They’re the stars I’ve hitched my wagon to, so to speak.
The questions that follow are intended to enhance your group’s reading and discussion of THE WASP EATER by William Lychack.

1. What is the meaning of the title of the novel? What emotions do the wasp scene in the book conjure for you? How does the author use this image to suggest what Daniel is feeling about his home life?

2. After his parents separate, Daniel grapples with a range of shifting loyalties and emotions. At one point, Lychack writes, “he missed his father and wished he could just come home. It was like a thread through everything, this feeling, and yet, in an odd way, he missed his mother even more, as if she were the one who needed to come back home” (p. 57). What does this say about Daniel’s understanding of the separation? What are some of the other internal, often contradictory, emotions with which Daniel must cope?

3. What are Bob’s strengths and weaknesses as a man and as a father? Do you find him more or less sympathetic than Anna? What is your sense of Anna as a mother? How do Daniel’s relationships with his mother and his father differ, and how do they evolve over the course of the book?

4. Lychack writes that Daniel “felt he barely existed anymore, felt himself insubstantial as a ghost” (p. 117). To what do you attribute his waning sense of self? Is there evidence that either of his parents has neglected him?

5. Thinking back to her acceptance of Bob’s proposal, Anna remembers that “she didn’t want to think — that was the problem — she wanted to feel for once” (p. 26). Does Lychack offer many clues about what the Cusslers’ early marriage must have been like? Do you believe that they were happy once, or that they were ill matched from the beginning? Were their personalities incompatible, or did their actions alone lead to their separation?

6. How does Joelyn’s presence complicate the Cusslers’ relationship? Anna recalls that when the girl first came to stay with them, “Joelyn was somehow the thin end of a wedge between herself and Bob” (p. 43). How does Anna respond when the girl returns to help out?

7. On their road trip, Bob mentions to Daniel that it is “always easier to get forgiveness than permission anyway, right?” (p. 130). How is this ironic? Why is forgiveness so hard for Anna and so easy for Bob? What do you think of Bob’s attempts at reconciliation?

8. What does the ring represent to Anna, Bob, Daniel, and Joelyn? How does this contribute to our understanding of the characters and their values and motivations?

9. What instances of betrayal do you find in The Wasp Eater, and how do they differ in degree and intention? Are some betrayals more forgivable than others?

10. What is the emotional effect of ending the novel with an epilogue set more than a decade later? Based on the events of the epilogue, do you believe Bob ultimately does receive forgiveness from Anna or from Daniel? Has the conflict between the parents been resolved? What seems to be the lasting impact on Daniel?

William Lychack is the author of a novel, The Wasp Eater, and a forthcoming collection of stories, The Architect of Flowers, both published by Houghton Mifflin. His work has appeared in The Best American Short Stories, Ploughshares, TriQuarterly, Witness, and on National Public Radio’s This American Life. A graduate of the writing program at the University of Michigan, he currently teaches at Connecticut College and in Lesley University’s low-residency MFA program. 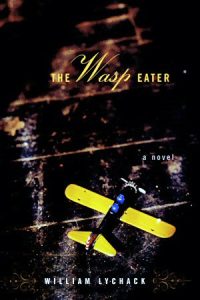