WHO HATES WHOM is a simple book of maps and accompanying text providing a country-by-country breakdown of who hates whom in ethnic, religious, economic, and territorial conflicts worldwide. Each deadly conflict, grim tragedy, and dreadful threat will be festively illustrated by brightly-colored maps covered with eye-catching arrows, symbols, and explanatory icons. If a baseball game is more enjoyable when you’ve got a scorecard, then WHO HATES WHOM will make living on Earth just a little more fun.

Each major nation of the world will get a page or three; more conflicts mean more pages. Russia may be worth four, while Iceland may deserve… well, maybe its name. Arrows pointing outward on each map will indicate conflicts with bordering nations; smaller two-way arrows inside a country will indicate civil war or other local territorial strife.

Everyone will likely hate at least one page of the book – the one describing his or her own hatreds. Finally, WHO HATES WHOM will end by looking forward: Who’s Gonna Hate Whom, providing predictions for future conflicts.

“It takes deft touch to combine this much-needed research with a razor sharp wit… You’ll laugh ’til you cry, but at least you’ll be one step ahead of CNN.”
— Gus Russo, author of Supermob and The Outfit

Harris a skilled storyteller, and the play-by-play he provides for his various matches pulls you in like a good sports story.”
— New York Times — on Prisoner of Trebekistan 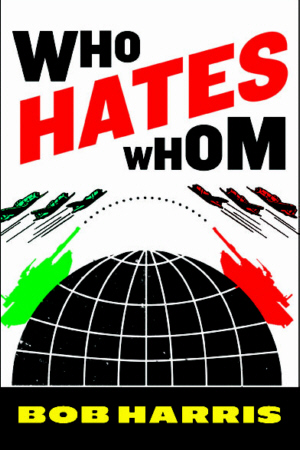