The sparkling memoir of a movie icon’s life in the footlights and on camera, THE GOOD, THE BAD, AND ME tells the extraordinary story of Eli Wallach’s many years dedicated to his craft. Beginning with his early days in Brooklyn and his college years in Texas, where he dreamed of becoming an actor, this book follows his career as one of the earliest members of the famed Actors Studio and as a Tony Award winner for his work on Broadway. Wallach has worked with such stars as Marlon Brando, Paul Newman, Marilyn Monroe, Gregory Peck, and Henry Fonda, and his many movies include The Magnificent Seven, How the West Was Won, the iconic The Good, the Bad and the Ugly, and, most recently, Mystic River. For more than fifty years Eli Wallach has held a special place in film and theater, and in a tale rich with anecdotes, wit, and remarkable insight he recounts his magical life in a world unlike any other.

“In an age where every Tom, Dick and Harry are writing their memoires of half lived lives, here is one of our great elder statesman of acting sharing his wealth of stories of a rich life (some wickedly funny, others extremely touching). Always there is the artist’s all observing eye and all embracing heart. A great read!”
— Liam Neeson, actor

“Eli Wallach is the happiest good actor I’ve ever known. He really enjoys the work, just as he must have enjoyed writing this probably true book.”
— Arthur Miller, play writer

“Unlike many books these days this one is terribly accurate. Working with Eli Wallach was one of the greatest pleasures of my life – he is an extremely versatile actor, and now a fine story teller.”
— Clint Eastwood, actor

“Eli Wallach is almost as good a writer as he is an actor – which is very!”
— Mike Nichols, director

Born in Brooklyn in 1915, Eli Wallach remains active in film and is still married to his wife of fifty-six years. He lives in New York City. 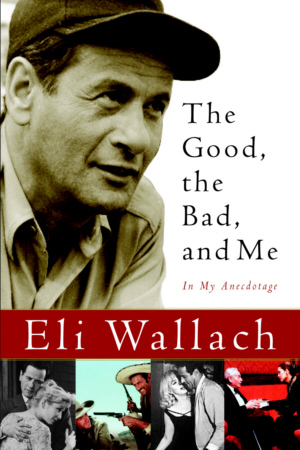