Bridging The Gap Between Rich And Poor In An Interconnected World

For Jacqueline Novogratz it all started back home in Alexandria, Virginia, with the blue sweater, a special gift that quickly became her prized possession—until the day she outgrew it and gave it away to Goodwill. Eleven years later in Africa, she spotted a young boy wearing that very sweater, with her name still on the tag inside. That the sweater had made its trek all the way to Rwanda was ample evidence, she thought, of how we are all connected, how our actions—and inaction—touch people every day across the globe, people we may never know or meet. It is this awareness that continues to drive her efforts to fight poverty worldwide.

Like the best-selling Three Cups of Tea, this book at once is a deeply personal coming-of-age story of a young idealist determined to change the world c Novogratz relates her experiences over two decades, first in Africa and later in India and Pakistan. She began as a banker and philanthropist, and now works as a venture capitalist, trying to effect real change in countries where the average citizen lives on less than $4 a day.

Reflecting the current trend toward socially responsible investing, THE BLUE SWEATER will inspire individuals seeking ways to contribute in a meaningful and effective manner.

“The Blue Sweater will inspire people around the world by seeing the difference one person can make in taking on challenges with courage, curiosity, drive and a great sense of possibility. It is a story for all of us, regardless of the country in which we were born.”
— Mary Robinson

“The decency of Jacqueline Novogratz shines through these pages and so does her strength. The stories she shares about the people she has met show the nobility of the human spirit and the breadth of the desire to stop suffering, to feed the hungry, to care for the sick, to empower the poor – in short, to make the world a better place. The Blue Sweater is a book of hope written by a practical idealist who won’t take “no” for an answer when it comes to building a better world. Jacqueline breathes new life into the phrase “a life of meaning” and she is living one everyday even as she asks us to join her.”
–Senator Bill Bradley

“Jacqueline’s book and her work represent an entirely new way to look at things, a vivid opportunity for change and most of all, an obligation to spread the word about the way the world has evolved. We need to wake up and listen to what she has to say. Hurry!”
— Seth Godin

“Jacqueline is a national treasure. Her pioneering work at Acumen Fund is positively influencing a whole generation of donors and recipients.”
— Seth Berkley

“A captivating first-person account of a young woman’s quest to close the gap between rich and poor. If one person can change the world, this is your window into how it’s done.”
— Chee Pearlman, former Editor in Chief, I.D. Magazine

“If you believe in the worth and capacity of individual initiative and in group commitment, or if you believe that our lives can be transformed by the events we live through, then you must read this book.”
— Daniel Toole, UNICEF Regional Director for South Asia

This is a wonderful book by a remarkable woman. It’s a story about doing enormous good while having some extraordinary experiences and even adventures. It touches the heart and the mind. I recommend it to anyone who wants to learn about what’s really going on in the world out there.
— Fareed Zakaria, Author of The Post-Americanb World 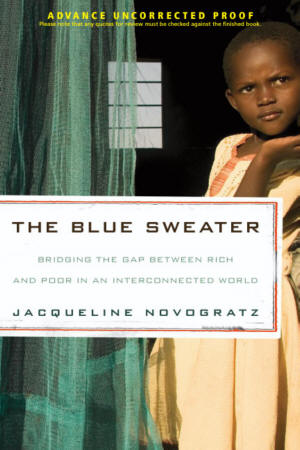