Rousseau, Hume, and the Limits of Human Understanding

The rise and spectacular fall of the friendship between the two great philosophers of the eighteenth century, barely six months after they first met, reverberated on both sides of the Channel. As the relationship between Jean-Jacques Rousseau and David Hume unraveled, a volley of rancorous letters was fired off, then quickly published and devoured by aristocrats, intellectuals, and common readers alike. Everyone took sides in this momentous dispute between the greatest of Enlightenment thinkers.

In this lively and revealing book, Robert Zaretsky and John T. Scott explore the unfolding rift between Rousseau and Hume. The authors are particularly fascinated by the connection between the thinkers’ lives and thought, especially the way that the failure of each to understand the other—and himself—illuminates the limits of human understanding. In addition, they situate the philosophers’ quarrel in the social, political, and intellectual milieu that informed their actions, as well as the actions of the other participants in the dispute, such as James Boswell, Adam Smith, and Voltaire. By examining the conflict through the prism of each philosopher’s contribution to Western thought, Zaretsky and Scott reveal the implications for the two men as individuals and philosophers as well as for the contemporary world.

“Zaretsky and Scott have crafted an excellent book, written with a dramatic flare that consistently provides a gripping narrative. It is superior to other books on the subject by taking seriously what is most important about Rousseau and Hume: their thought.”
— Christopher Kelly, Boston College

“This book is an exceptional contribution to the study of both western political philosophy and the history and politics of 18th century France. There are fascinating insights on every page.”
— Roger D. Masters, Dartmouth College

“Why was the friendship between Jean-Jacques Rousseau and David Hume, two of the greatest thinkers of the Enlightenment, violently broken off? These two men were supremely intelligent, but were they wise? Is there any relation at all between the ideas of philosophers and the other aspects of their identities—their bodies, moods, ancient wounds, appetites, passions? If philosophy is to be an art of living and not only an exchange of concepts, these questions deserve to be asked. Zaretsky and Scott’s book, an in-depth study of this famous episode in philosophical history, suggests how they might be answered.”
— Tzvetan Todorov

“In 1766, the intellectual quarrel between David Hume and Jean-Jacques Rousseau resounded throughout all of Europe. In this fascinating book—half biography, half intellectual history of the Enlightenment—the authors retrace the war of words engaged in by these two diametrically opposed philosophers.”
— Raymond Trousson, Free University of Brussels, and author of the biography Jean-Jacques Rousseau

“An excellent book: a page turner to begin with, but also very well researched and very fair. Rousseau—a man who was resolved to bite your nose if you didn’t acknowledge his sensibility and basic goodness—was surely sincere. But so was David Hume. I learned a great deal from these pages and immensely enjoyed reading them also.”
— Patrice Higonnet, Goelet Professor of French History, Harvard University

“This arresting book is like a novel which one reads late into the night—a novel whose characters happen to be famous thinkers: Rousseau and Hume. Voltaire looms in the background. Brilliant Parisian ladies appear too. What can be more exhilarating than a tale of intelligence and discord, and of the 18th century revisited right before the French Revolution—so near us, so far away?”
— Adam Zagajewski 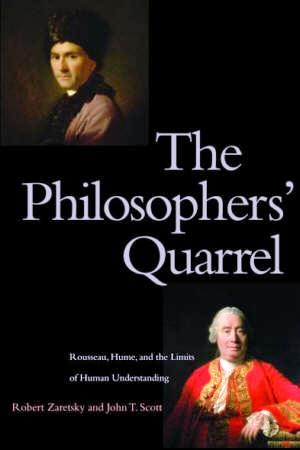