World War II in the Netherlands, as written by the people who lived through it
Publisher Ecco/Harper Colins, February 21, 2023

Based on select writings from an exceptional Amsterdam archive containing more than two thousand Dutch diaries from World War II, The Diary Keepers illuminates a part of history we haven’t seen in quite this way before. Nina Siegal, an accomplished journalist and novelist, weaves together excerpts from the daily journals of collabo­rators, resistors, and the persecuted—a Dutch Nazi police detective, a Jewish journalist imprisoned at Westerbork transit camp, a grocery store owner who saved dozens of lives— into a braided nonfictional narrative of the Nazi occupation and the Dutch Holocaust, as individuals experienced it day by day.

Siegal provides the context, both historical and personal, while she tries to make sense of her own relationship to this past. As a “second-generation survivor” born and raised in New York, she attempts to understand what it meant for her mother and maternal grand ­parents to live through the war in Europe in those times. When Siegal moved to Amsterdam, those questions came up again, as did another horrifying one: Why did 75 percent of the Dutch Jewish community perish in the war, while in other Western European countries the proportions were significantly lower? How did this square with the narratives of Dutch resistance she had heard so much about?

Searching and singular, The Diary Keepers takes us into the lives of seven diary writers and follows their pasts into the present, through interviews with those who preserved and inherited these diaries. Along the way, Siegal investigates the nature of memory and how the traumatic past is rewritten again and again.

NINA SIEGAL is an author and journalist who works as a regular contributor to the Culture section of the New York Times. The author of three novels, she is currently working on her doctoral dissertation at the University of Amsterdam’s research school for Heritage, Memory and Material Culture. Siegal was a recipient of a 2021 Whiting Creative Nonfiction Grant. She lives in Amsterdam with her daughter and dog.

“Reading The Diary Keepers, I found myself marveling at how differently people respond to disaster.  Why does a shop keeper in a small town immediately decide to hide Jews at great personal risk?  Why does a former journalist insist on keeping meticulous diaries in the Westerbork transit camp?  Why does a doctor’s wife fraternize with the Nazis?  This moving and masterful book tells the history of those fateful war years, and their aftermath, in a wonderfully intimate way.”—Margot Livesey, author of The Boy in the Field and The Flight of Gemma Hardy

“The Diary Keepers adds an essential piece to the ever-enlarging history of the Holocaust and of World War II.  Nina Siegal’s lens is on the Netherlands—where more Jews were sent to their deaths than any country in Western Europe.  But this is no regional story.  Her book belongs alongside the ambitious documentary work of Svetlana Alexievich in which the gathering of “ordinary” voices—here Jews and non-Jews, fascists, and those resisting Nazi occupation—are gathered in real time, with Siegal’s deep dive into historical research and delicately etched family history.  A work of orchestral power, moving among voices.  I was riveted.” –Patricia Hampl, author of  A Romantic Education and The Florist’s Daughter

“A beautiful, poignant book about the darkest period in modern Dutch history. Siegal skillfully weaves together the gripping narratives of seven diarists – Jews, bystanders, and Nazis – to tell the story of the German occupation of the Netherlands during World War II. It’s a forensic examination of previously unknown stories told by ordinary people who lived through it; many of whom did not live to see freedom. This book gives a powerful voice to those forgotten witnesses.  As the memory of World War II recedes, the last Holocaust survivors die, and antisemitism on the rise globally, giving life to their stories is more important than ever. Siegal does this masterfully and with the utmost care for the past.”—David de Jong, author of Nazi Billionaires: The Dark History of Germany’s Wealthiest Dynasties

Nina Siegal has accomplished a remarkable feat….Through the elegantly curated words of Jews and non-Jews, Dutch citizens and Nazi officials, we experience the terrifying invasion off German bombers, the onset of laws barring Jews from business and the professions, from parks and theaters; the sudden roundups and deportations; the transit camps and massacres until 75 percent of the 140,000 Jews of Holland are murdered. With thoughtful and insightful observations of her own, Nina Siegal helps us understand how in a prosperous and cultivated Western European country that could happen, posing a warning for our own deeply fractured country. — Joseph Berger, author of Displaced Persons and The Pious Ones 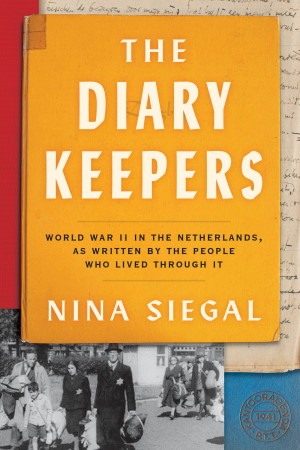