Chronicles of a Midlife Move

An insightful collection of essays about starting over in midlife from a fresh and funny new voice.

Katherine Lanpher officially moved to Manhattan on a leap day, transferring from a rooted life in the Midwest to a new job, a new city, and a new sense of who she was. But reinvention is a tricky business, and starting over in the middle of life isn’t for the faint of heart.

Katherine Lanpher’s short essay on her first six months in New York, “A Manhattan Admonition,” was published last year in the New York Times and remained on their list of most e-mailed stories for weeks. Now she has written a book chronicling how her past life and loves have prepared her for unexpected discoveries in her new home. She looks back on her marriage, her early days in newspapers, and her childhood in the Midwest. And, with startling insight, she examines her new world—how beauty is defined in New York, how the landscape differs from the Midwest, and how good food and books have been constants in her life.

Katherine Lanpher’s writing has appeared in More magazine and the New York Times. The former host of Minnesota Public Radio’s Midmorning show, she was also a columnist for the St. Paul Pioneer Press. She moved to Manhattan on a Leap Day 2004 to join The Al Franken Show on Air America Radio, where she stayed until last fall. She still lives in New York City.

“Lanpher has written that memoir you always want to read: the kind that’s so absorbing you feel like you’re leading a second life, and one in which every experience imparts not only wisdom but courage and heart.”
— Melissa Bank, author of The Girls’ Guide to Hunting and Fishing and The Wonder Spot

“Leap Days is an intimate tour of Manhattan—and life itself—from an exceptionally gifted seer and sayer. When an abrupt career and geographic move pitches Lanpher into months of angst and doubt, she uses her incredible wit and considerable smarts to survive. More than survive—she prevails.”
— Mary Kay Blakely, author of American Mom and Wake me When it’s Over

“By turns funny, charming, and delightful, and sometimes a startling reminder of how far women have come in just one lifetime.”
— Cheryl Peck, author of Fat Girls and Lawn Chairs and Revenge of the Paste Eaters 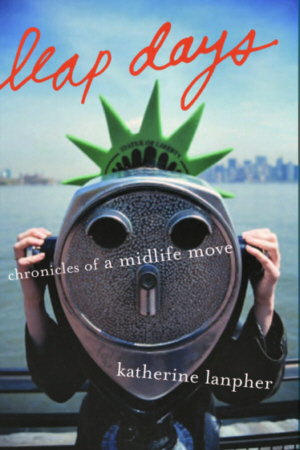