365 Thank Yous: The Year a Simple Act of Gratitude Changed My Life

An inspiring memoir about how the seemingly ordinary act of writing thank you notes led a middle-aged man out of hopelessness and into the fulfillment of lifelong dreams.

At age 53, John Kralik was about to begin the new year at a personal nadir—confronted with a law firm in the red, a painful divorce, increasingly distant children, a small and poorly heated apartment, and a newly ex-girlfriend. During a walk in the hills on New Year’s Day, Kralik was struck by the belief that his life might be at least a bit tolerable if he could find a way to be grateful for what he had—and his inspiring thank-you-note story began.

One by one, day after day, on plain note cards and with unadorned sincerity, he thanked close loved ones for gifts or kindnesses, he thanked business associates and former business associates, he thanked store clerks and a handyman, college friends and current foes—each with a brief handwritten note. The benefits that quickly began to come his way—from financial gain to companionship to inner peace—surprised him. And turned his life around. By the time John wrote his 365th thank you note, he’d lost weight, his business was prospering, his children were well and he’d grown closer to them, he’d reconnected with dear friends, his girlfriend had returned—and there were other positive changes in his life, even more profound and surprising.

“Profoundly honest and uplifting, John Kralik’s story reminds us of all those in our own lives who deserve our thanks. Though his journey was remarkably personal, it has the power to be a call to action for all of us.”
— Jeffrey Zaslow, coauthor of The Last Lecture

“To paraphrase Edmund Wilson, gratitude is one of those rare things you get more of by giving it away. With lucidity, warmth, and grace, this is the lesson that John Kralik has imparted to us. I am indeed grateful for this book.!”
— Erik Kolbell, former minister of justice, Riverside Church, and author of The God of Second Chances 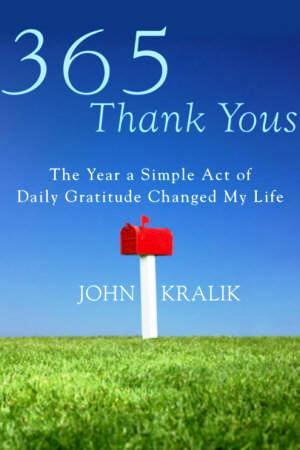