Amidst terrible famine a woman who has strange visions is accused of witchcraft by her daughter-in-law. Is she guilty or is her mind simply failing her?

A widow, Güde lives with her son and his wife, Irmeltrud, and their children. Irmeltrud resents her presence: she is too old to work yet she eats from the family’s table. When famine grips the small German town, Irmeltrud sends Güde out to beg for food. As the old woman wanders she imagines that the devil asks for her soul in exchange for a basket of meat. Later, she arrives home with a basket she did not have before she left. She is unsure if what she saw in the woods was real; perhaps she signed the devil’s contract after all.

Then a friar arrives claiming that he can end the famine by finding the witch among them and bringing her to God’s justice. At once the village is full of suspicion and accusation, and Güde falls prey to further dreams—visions that feel real—in which her dead husband appears, women fly, and unspeakable things happen in the dark. Seeing an opportunity to be rid of Güde, Irmeltrud offers to help the friar in his quest. But does she believe her mother-in-law has entered a pact with the devil? And if she names Güde as a witch, how will she keep suspicion from also falling on herself?

“Evocative and totally engrossing, it brought to mind The Year of Wonders by Geraldine Brooks.”
— Robert Alexander, author of The Kitchen Boy and Rasputin’s Daughter

“Surprising and engrossing, The Witch’s Trinity draws you in and then keeps you gripped till the very last page.”
— Martin Davies, author of The Conjurer’s Bird

“The Witch’s Trinity is one of those mind-bending histories that make you wonder how many women in the 16th century hid in fear of being condemned for their healing powers. Erika Mailman superbly re-creates the terror of the women who lost, and the hope of those who managed to survive, the most egregious war of the sexes.”
— Holly Payne, author of The Virgin’s Knot and The Sound of Blue

“A linguistic enchantress has arrived among us, gifted in transmogrifying the mundanities of historical fiction into tableaux of indelible terror and abiding beauty.”
— James Morrow, author of The Last Witchfinder

“A Gothic horror story—starvation, superstition, and persecution … this is a disturbing and compelling read.”
— Tobsha Learner, author of The Witch of Cologne 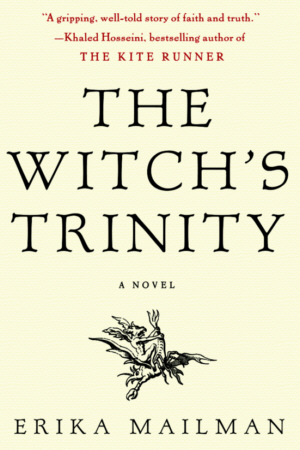