Based on the real life love story between poet and author Joy Davidman and literary icon C.S. Lewis, Patti Callahan’s latest novel, BECOMING MRS. LEWIS, is the story of a woman, who, until now, has been overlooked by history, but who was Lewis’s best friend, editor and the only woman Lewis ever loved. Their improbable relationship, which began as a simple correspondence, led to some of the greatest works on love, grief and faith ever written by C.S. Lewis, yet Davidman is rarely given credit for being the muse she was to the beloved author.

A brilliant writer herself, Joy was a novelist, a critic, a protégé of The MacDowell Colony, and a multi-award-winning poet. On paper, everything about her seemed ill-matched for an Oxford don and Christian apologist. She was an ex-Jew, ex-atheist, ex-Communist, married woman from New York, the mother of two young boys. It seemed an impossible pairing.

Her circuitous journey from America to England, and back again, was fraught with heartbreak, poverty, risk, divorce, cross-ocean travel, fascinating friendships and great adventure. Largely rejected by his Oxford don friends, her love for Lewis never wavered. Joy was far more than the dying wife portrayed in Shadowlands and here finally is the true story of a frequently misunderstood woman. BECOMING MRS. LEWIS reveals Joy’s lion-hearted courage, conflicted and disparaged choices, as well as her abiding love for the man we know as C.S. Lewis, and his profoundly felt love for her, his best friend, and ultimately this once confirmed bachelor’s lover and wife.

See the inspiration behind Becoming Mrs. Lewis in this video…

“Patti Callahan seems to have found the story she was born to tell in this tale of unlikely friendship turned true love between Joy Davidman and C.S Lewis, a relationship that tests the bounds of faith and radically alters both of their lives…. Luminous and penetrating.”
–Paula McLain, author of The Paris Wife and Circling the Sun

“In Becoming Mrs. Lewis, Patti Callahan Henry breathes wondrous fresh life into one of the greatest literary love stories of all time:  the unlikely romance between English writer C.S. Lewis and the much younger American divorcee, Joy Davidman. Callahan chronicles their complex and unconventional relationship with a sure voice, deep insight into character and eye for period detail. The result is a deeply moving story about love and loss that is transformative and magical.”
–Pam Jenoff, New York Times Bestselling Author of The Orphan’s Tale

“Patti Callahan’s prose reads like poetry as she deftly unearths a lost love story that begs to be remembered and retold. I was swept along, filled with hope, and entirely beguiled, not only by the life lived behind the veil of C.S. Lewis’s books but also by the woman who won his heart. A literary treasure from first page to last.”
-– Lisa Wingate, New York Times Bestselling author of Before We Were Yours

“Becoming Mrs. Lewis is at once profoundly evocative, revealing an intimate view of a woman whose love and story had never been fully told…until now.  Patti Callahan brings to life the elusive Joy Davidman and illuminates the achingly touching romance between Joy and C.S. Lewis.  This is the book Patti Callhan was born to write.  Becoming Mrs. Lewis is a tour de force and the must-read of the season! — Mary Alice Monroe, author of Beach House Reunion

“Patti Callahan has written my favorite book of the year. Becoming Mrs. Lewis deftly explores the life and work of Joy Davidman, a bold and brilliant woman who is long overdue her time in the spotlight. Carefully researched. Beautifully written. Deeply romantic. Fiercely intelligent. It is both a meditation on marriage and a whopping grand adventure. Touching, tender, and triumphant, this is a love story for the ages.” – Ariel Lawhon, author of I Was Anastasia

“I thought I knew Joy Davidman, the oft mentioned but little examined wife of C.S. Lewis, but in Becoming Mrs. Lewis, Patti Callahan breathes life into this fascinating woman whose hunger for knowledge leads her to buck tradition at every turn. In a beautifully crafted account, Patti unveils Joy as a passionate and courageous—yet very human–seeker of answers to the meaning of life and the depths of faith. Becoming Mrs. Lewis is an unlikely love story that will touch heart, mind, and soul.” — Diane Chamberlain, New York Times Bestselling Author of The Dream Daughter 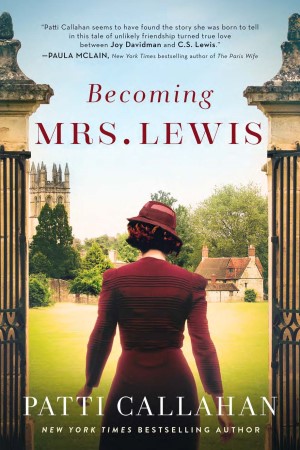