The Scribe of Siena

There were two beginnings to The Scribe of Siena. I don’t mean the beginning of the actual book (which I wrote more than twice); I mean the book’s origins. One of those two beginnings was the history itself—Siena’s devastation and failure to recover after the Plague of 1348. The other beginning? For now I’ll just say it had nothing to do with history.

I’m a doctor—a neurologist—and a neuroscientist. In my scientific life, I often come upon a question I don’t know the answer to. When that happens, I research the answer. If I don’t find one, I ask all the experts I can find. If I still haven’t found an answer, or I find conflicting answers, I begin to suspect that the answer probably isn’t known. This uncertainty is very compelling for me as a scientist; it means that I’ve found my next research project. That’s what happened when I was preparing to write The Scribe of Siena.

Twelve years ago, on my honeymoon in Italy I fell in love with Siena, as many people who visit it do, seeing the way the city balances magically between the past and the present. Writing is like traveling, and when I began to write this book I knew that if I created a novel with Siena at its heart, I could happily spend not just days or weeks, but months, and even years, living in the world I would create. Seven years after that trip, I sat down to do the research for this book. As I read, I learned that Siena had fared particularly badly in the great Plague of the 1340s—worse than many other Tuscan cities, Florence in particular. And the more I read the more I realized that a single clear answer didn’t exist to explain Siena’s decline during and after the Plague. To make things more interesting, Florence was Siena’s arch-enemy and the city of the Medicis, including one particular Medici who was reported to have been hanged in the 1340s for a capital crime. And in the 1340s, a plot backed by Florentine nobles to overthrow Siena’s government had been attempted, and had failed. Together, these details gave me that hair-raising moment, the moment I know so well from science. If I’d been writing science, I would have had to be absolutely, accurate, or risk losing my job. But if I was going to be writing fiction…well then, I could make things up.
Historical fiction benefits from accuracy: building a story on a wealth of rich and deep factual material. I did not discard my scientific method entirely but, whenever there was a gap—for example, when I read that there had been a fifth fresco on the façade of Siena’s Medieval hospital (Ospedale), but no one knew what it had depicted or who might have painted it—building on what was known, I’d invent something, in a way that the unforgivingly factual business of science and medicine would not allow.

My research began with reading–lots of it. I read about the Plague until I had nightmares. I read Italian art, economy, banking, farming and food production, architecture, religious practice, and tax structure. I read travel guides, text books, out-of-print monographs, journal articles, Wikipedia entries, and fourteenth century chronicles. I paged through excerpts from 600 year-old trial records and amused my family by quoting from an exceptionally pungent essay on medieval insults. And I talked to experts.

The word “medieval” is often used to mean backward. But this has no relationship whatsoever to what scholars of medieval history, particularly Italian medieval history, think about. When the historians kind enough to listen to my lists of questions understood that– rather than focus on the clichés– I intended to make a character who is so moved by the sweetness and beauty of medieval life that she questions whether she can return to her own, they were generous in offering me guidance. Through them I learned to greatly appreciate a legal system that is complex and elegant, and a city’s devotion to the creation and protection of masterful art. From my experts I also learned the details of daily life: Does a medieval Italian child drink milk? What language was spoken in what would eventually become Tuscany in the 1340s, and would it sound like Italian? Was intellectual life and literacy possible or likely for women in 14th century Italy?

Armed with useful facts and a deeper understanding of the place, time, and people I was trying to create, I went about the business, and the heady pleasure, of writing. I wrote mostly on my absurdly long subway commute between central Brooklyn and Washington Heights in northern Manhattan, flipping open my laptop and squeezing into a seat when I could get one, often looking up suddenly in a 14th-century daze to realize I’d missed my stop. I was constantly writing in my head, trusting that when I had time to put the words down, they’d be there waiting for me.
Because food brings a place and time to life, I had to know firsthand what it was like to cook and eat the cuisine of medieval Italy. I bought a historic collection of recipes and threw myself and 16 guests a medieval feast. I’ve made (and eaten) almost all the food in my novel.

I’ve said there were two beginnings to this book. The first was historical—the mystery of Siena’s post-Plague decline. The second was personal.
Being a neurologist puts me in the privileged and sometimes agonizingly sad position of helping patients who are beginning to lose, or have already lost, the ability to move, feel, see, think, remember, and love. I care deeply for my patients, but, like any physician, I have to protect myself from my patient’s tragedies so that I can take care of them. My work tested the boundaries between myself and those whose suffering I experienced.

When I was in medical school, entranced by the magic of going inside the body in order to heal, I began training one on one with a surgeon. One day a patient came to see my mentor all the way from Greece. She was a 32 year old neurologist who’d come for treatment of a breast lump. Medical students usually have more time to listen to patients than full-fledged doctors, and this patient was far from home with no one else to talk to. We talked for hours—not only about her medical problem—but about lots of other things—being a woman in medicine, in Greece, the practice of neurology, life in general. Her breast biopsy was benign, but before she went home she decided to have a colonoscopy, and the result was not. It showed a suspicious mass that was likely colon cancer.

She was terrified. I was terrified. She seemed impossibly young for colon cancer, which had killed my grandfather. And now, I was scheduled to assist in the operating room the next day, I was not ready. I was afraid I couldn’t marshal the appropriate remove to allow my hands to do what they needed to do in the O.R. I’d grown too close.

I found a remote patch of grass on campus where I could sit alone and think. I had to figure out how to get control of this empathy, rein it in enough so I could give my patient, who had begun to feel like my friend, the support she needed, without losing myself. That is when I started the process—what has become a decades-long effort for me–of controlling my intense experience of a patient’s grief and fear, to turn it into a tool for healing. For my new friend the outcome was a good one and the cancer was removed. But that experience left me more aware of that danger, about the far edge of empathy, uncontrolled. How far could it go—the ability to feel what someone else is feeling, or was feeling—even through the written word, even through words written hundreds of years ago? Could it, for example, blur the boundaries not only between self and other, but between two times?

My experience of a physician’s empathy, and its dangers, led me to create my protagonist Beatrice. For Beatrice, a neurosurgeon who enjoys the great privilege of working inside patients’ brains with her hands, empathy—and its consequences—come unbidden, and unravel her orderly life.

Why did I set the book in Siena? I loved the place certainly, and could imagine spending years thinking and writing about it. But it was more than love. Siena is a small but remarkable city in northern Italy, a city that is simultaneously modern and medieval. It is a city where the past and present can, and do, coexist. And it became the perfect place for me to set this story of a woman who, at first against her will, and then by desire, loses her place in time. 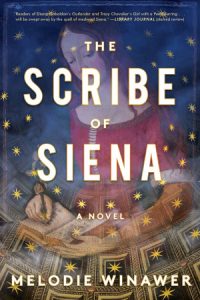