The Story Behind KEEP ME POSTED by Lisa  Beazley

Starting a blog was a no-brainer when I found myself transplanted from New York to Singapore with my husband and two young boys. The obvious way for someone like me – who has been writing for a job and a hobby her whole life – to let my family and friends know what I was up to in Southeast Asia.

But my posts were so mundane, so cringe-inducing in their self-importance, that I couldn’t bear to make them public. So I took my kids to the zoo, snapped some adorable photos, and had some clever if pedestrian thoughts on how kids and adults experience the world differently. So what? Every time I sat down to write a post, I felt like either a Chicken Soup for the Soul reject, or Andy Rooney blathering on about trying to buy stamps and eventually coming to the conclusion that there are no decent people left in the world.

Plus, living in a place many of my extended family members thought was China lent me an air of mystery. Maybe they were picturing me haggling in Mandarin with an old Fu-Man-Chu looking guy over the price of fish at the market. Why would I ruin that for them with the truth: that for the most part I lived in an expat bubble of whiteness, drank an absurd amount of Australian white wine, and still fed my kids Cheerios for breakfast and spaghetti for dinner.

Sure, I had a bunch of funny stories about misunderstandings with my Philippina domestic helper. And my American boys speak with an unidentifiable accent and harbor a deep confusion over the standard “ball” sports. These make for well-liked Facebook updates, but not much more.

Yet over time, amusing observations and droll stories do lead to deeper examinations and shifts in perspective. And isn’t that exactly what primes one for writing? Then there were the bigger themes that an international move can get one thinking about….relationships between adult siblings who have less and less in common and see one another once a year; the dejection/guilt /shame/pride that comes from having “Mom” become your chief – and only – identity; suddenly having the time to pay attention to your marriage and discovering it’s been neglected to the point where you’re not sure it can be salvaged. Aren’t these topics more deeply – and boldly – explored when they aren’t tethered to the quotidian minutia of my real life? Aren’t they just the thing for a novel?

And so I took all of these thoughts and moments and feelings and blended them into two characters that I would want as friends, whose adventures and flaws and strength would make me laugh and assure me that I’m not doing it wrong, and that, no matter what, in the end, everything is almost always going to be OK.

But really, the short answer is that I wrote Keep Me Posted because I hated my blog. 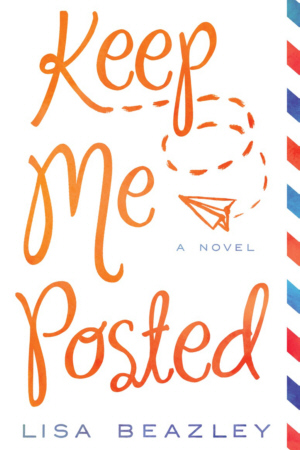