As I began gathering ideas for If Wishes Were Horses, I was unaware that so many of my personal memories would find their way into the story.

I knew that I wanted to tell a story about learning to love again after suffering grievous loss. Moreover, I wanted the main character to believe that the tragedy affecting his life was at least partly his own fault, and to describe his difficult search for self-forgiveness. But as is oftentimes the case when creating a new story, many of the pieces were missing.

I had only two firm ideas: I knew that Wyatt Blaine, the novel’s protagonist, would be a widower and Florida horse rancher. I also knew that Wyatt’s late wife Krista would share the same occupation as my wife Joyce, and be a well-known psychologist. Part of Joyce’s practice is in Boca Raton, where some of the novel takes place

Some years ago, Joyce endured a tragic loss. Three days before her youngest son’s fourteenth birthday, he was hit and killed by a drunk driver. The startling proximity of those two events always seemed especially poignant, leading me to incorporate a version of the accident into the book. I decided that a similar car crash would take the lives of Wyatt’s wife Krista and young son Danny, deeply scarring Wyatt’s heart and causing him to believe that he would never love again.

After the cathartic experience of confronting her son’s killer in court, Joyce eventually learned to forgive him. But unlike Joyce, Wyatt could achieve no such closure, because the man who destroyed his family died in the crash with them.

Without being able to emotionally engage the man who had killed his wife and son, how could Wyatt achieve the same kind of forgiveness that Joyce had found, I wondered? And more importantly, by what process could he ever come to forgive himself? Like so many things in life, the answers arrived unexpectedly.

After Joyce and I were married, I began attending her church. She is a practicing Episcopalian, and her faith has been a constant source of strength for her. I was raised Methodist, and although at first I found the Episcopalian service unfamiliar, I soon became fond of it. A particularly touching part of the service is “The Blessings”, during which the priest asks that those celebrating a birthday, anniversary, or other special day to please come forward and be recognized.

One Sunday during the Blessings I watched a man stand from his pew, just as some other parishioners were doing. Rather than approach the sanctuary with them, he turned and trudged the opposite way, toward the exit. With his head bowed sorrowfully, he handed some cash to one of the ushers then he exited the church.

Who was he, I wondered, and why had he chosen to leave at that exact moment? Had he perhaps suffered some great personal misfortune on this date, one that caused him too much pain to remain for the Blessings?

The mystery would remain unsolved, for I never saw him again. But his somber departure from the church intrigued me, and would become another part of my book. Wyatt Blaine would lose his wife and child on what would have been an otherwise joyous and significant day in his life, I decided. And like that unknown man, the tragedy would affect Wyatt so grievously that he too would become emotionally unable to endure the Blessings.

I now had the beginnings of a story, but I also wanted a subplot that was interesting and unique. Along with some bits from my own past, the ideas that Wyatt was a rancher and that his wife had been a psychologist soon conspired to provide another answer.

While growing up, I owned several horses. One was an American Quarter Horse named Duchess. I loved that horse more than any other and she oftentimes invades my thoughts even now, long after our time together has passed. My father and I also owned racehorses for a time, and many were the nights when we would drive to the track, eager to watch our standardbreds run.

I learned much about horses during those days, and some of that knowledge would find its way into my novel. Caring for horses of my own surely taught me greater patience and responsibility, but those weren’t the only benefits. It was the unconditional love I received from horses that helped me through many of the trying and confusing times that all teenagers’ experience.

I had also heard of equine therapy, or “horse therapy”, as it is more commonly known. On doing research and interviewing people who conduct such programs, I learned that horse therapy is a process of helping people cope with various physical and/or emotional problems by introducing them to the joys of equestrianism. I also discovered that these programs sometimes include psychotherapy, and are often designed specifically for troubled teenagers. It seemed that another piece of the puzzle had arrived.

I decided that before her death, Wyatt’s wife ran a specialized horse therapy program for troubled teens at the Flying B, the Blaine family ranch. Called New Beginnings, the program was one of her own invention that melded psychological counseling with equestrianism, but was shut down after her sudden death. In hopes of finding closure by helping others, Wyatt would resurrect Krista’s New Beginnings Program. And this time the program would be free of charge.

But would Wyatt’s touching gesture be enough to grant him the self-forgiveness he searched for, and to learn to love again? No, I decided. Wyatt still needed to be confronted by something far more personal if he was to ever fully heal; something that was cathartic, totally unexpected, and would force him to examine his pain and guilt in a truly profound and personal way.
And so to Wyatt’s great surprise, the widow of the man responsible for the deaths of his family would ask his permission to enroll her troubled son in his revived program. When Wyatt reluctantly agrees, his well-ordered world would become disrupted in ways that he could have never imagined. But as their lives intertwined, these three people who were both united and divided by a mutual tragedy would hopefully find the closure for which they had long been searching.

Once I began putting the story into words, yet more bits and pieces from my past filtered in, such as growing up in a large country house with stables, and learning from my father how to shoot, hunt, and play poker. And like the novel’s mother and son, my mother taught at my high school while I too prowled those same halls. As these various elements arrived on the scene, the story assumed its final form.
There is far more contained in the novel than I have revealed in this brief essay. But in the end, If Wishes Were Horses is not about equestrianism, ranching, or even horse therapy. It is about the power of self-forgiveness and learning to love again after horrific loss; obstacles that any of us might be forced to face one day, just as Wyatt did. And more importantly, it offers the hope that should such a tragedy happen, perhaps someone caring will enter our lives—no matter how unwelcome they might at first seem—and unexpectedly help us through it. 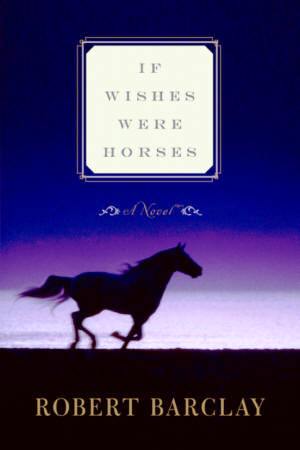