As I began writing, I knew that I wanted to incorporate some of my own life’s experiences into the book, along with an authentic sense of history. “Write about what you know!” is the very good advice that hopeful writers often hear. I already knew about lakeside cottages, fishing, boating, and hiking. What I did not know much about, however, was what civilian life was what like in America during World War II, the other time period I hoped to use in the book. Luckily, I was able to get some firsthand knowledge on that score, because both of my parents still carry with them vivid recollections of those days.

During the war, my mother’s father was a chicken farmer in upstate New York. Part of his operation was a successful feed store. Although every American was experiencing the rationing of foodstuffs, gasoline, alcohol, etc., because of my grandfather’s occupation, my mother’s family ate very well–provided one liked a steady diet of chicken and eggs! Even so, acquiring most other things remained as difficult for them as it was for everyone else. My Mom has oftentimes told me how the chickenfeed was regularly delivered to their farm in gingham bags, and rather than throw the bags away, her mother would reuse them to make dresses for herself and her two older sisters. During those days, one did what one must.

My Father’s experience was rather different. A bit too young to be drafted during World War II, he became a likable rogue, and literally made his living buying and selling gas ration stamps on the black market. And aside from not having a clubfoot, I am told by my Mom that my Dad both looked and behaved much like Greg Butler. As I wrote the book, each of my parents continued to give me valuable insight and details into what life was like during World War II, and how they dealt with the various hardships of those days.

Sometime around 1966, my mother and father bought a lakeside cottage in Ontario, about a six-hour drive from our home. The cottage was located on a lake called Round Lake, and it is in fact an exact duplicate to the one that Chelsea inherits in the book. Our boathouse, too, was nearly identical to Chelsea’s.

This was where my father taught me how to fish, run a speedboat, and fillet and cook walleyes. And, not far from the cottage there lays a high outcropping called Red Rock Mountain, where both the climb and the view from the top are virtually identical to those experienced by Chelsea, Brandon, Brooke, and Greg. I can still remember clambering to the top of that peak, nearly every time I visited the cabin. And, just like the fireplace hearth in Chelsea’s cabin that was made entirely of rose quartz rocks, so too was the fireplace in our cabin, its stones also harvested from the vicinity of Red Rock Mountain.

To my great delight, one day while I was visiting the cottage, a floatplane landed on the lake and then taxied down to the cottage next door, where the pilot exited the plane and tied her up at their dock. Hopelessly intrigued, I couldn’t help to wander over and ask about it. The pilot was more than happy to take me for a ride, which immediately sparked my interest in flying. Two years later I got my pilot’s license, and helped enable me to describe Brandon’s flying experiences in the book.

Like Chelsea’s grandmother Brooke, my paternal grandmother Joyce was also a gentle, loving, and artistic soul. And like Brooke, Joyce loved to paint. Sadly, I too lost my grandmother around the same time in my life that Chelsea loses Brooke. Since writing, “More Than Words Can Say”, I have oftentimes wished that my grandmother had bequeathed to me a secret diary, just as Brooke had done for Chelsea. Sadly, however, that was not the case.

To my great dismay, my parents decided to sell their beloved lakeside cottage in 1985. I can still remember the last time I visited. The windows were boarded up, the boathouse had already been locked and closed, the dock had been pulled ashore, and winter was fast approaching. Knowing that the cottage was being sold, I had gone there to be alone for a few days. I still can remember standing in the living room before that rose quartz fireplace and literally saying goodbye to the place, before I glumly locked the door, put the key in my pocket, and finally drove back home for the last time.

I have often thought that I might inquire about the cottage and try to buy it from whoever owns it now, but the distances involved, and my wife’s busy neuropsychology practice, would make visiting there impractical. Therefore, I shelved the idea, much the way each of us is sometimes forced to lovingly stow away our dreams. But who knows? Perhaps someday I will in fact buy back my father’s wonderful old cottage. Or maybe at least visit there, in an attempt to relive some of my most cherished memories.

But for now, at least, having incorporated that lovely old place into “More Than Words Can Say” will simply have to do. 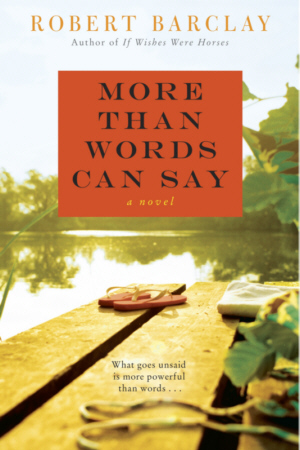 Reviews
Story Behind the Book