Booklist – August 1, 2005
“In this foray into the psychology of acquisition, Akhtar helps us understand how humans assuage their nostalgia, pacify a craving for the beautiful, or stimulate their libido by acquiring things. He shows how some acts of acquisition help bind communities together in shared appreciation, while others—such as those involving pornographers—threaten our sense of mutual respect… And among the world’s displaced refugees, Akhtar diagnoses a pain caused not as much by confrontation with unfamiliar objects as by loss of cherished ones. A subtle and multifaceted study.”
— Bryce Christensen

Library Journal – July 1, 2005
“Psychoanalyst and poet Akhtar takes readers on a quirky tour of the ordinary objects that populate our lives… Because he bases his assertions on a mixture of studies, personal anecdotes, and examples from history, literature, science, religion, art, and popular culture, readers may disagree at times. Nevertheless, they can still ponder Akhtar’s psychosocial interpretations of our relationship with the objects around us. His skillful layering of stories also makes for an engaging, recreational read. Recommended for public and academic libraries.”
— Marianne Le, Everett 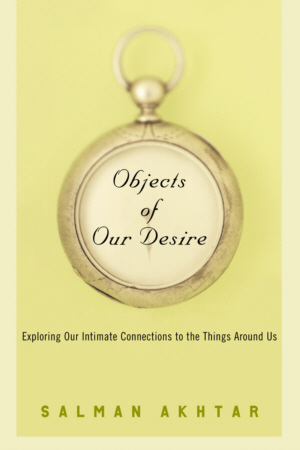