ThePilot.com – September 16, 2007
“An unlikely but marvelous source of understanding and comfort… This is a biography of a spiritual journey with golf as its vehicle, a microcosm of what philosophically and spiritually nags at all human beings but which only a fortunate few can ever comprehend – God’s intentions and our responses. Enriched by humor and ironies and unlikely encounters, the story rivets the reader, even those unschooled (as am I) in the intricacies and subtleties of golf. This is a “can’t-put-it-down” novel. Along the way… we are led to affirm… the possibilities for second chances and forgiveness.”
— Larry McGehee

Providence Journal – January 8, 2006
“Golfing with God is what the French would call a jeu d’esprit, a kind of tongue-in-cheek fantasy-parable-fable… Merullo writes such a graceful, compassionate and fluid prose that you cannot resist the characters’ very real struggles and concerns. His prose is as wonderfully down-to-earth as his tale is heaven-sent. Will I take up golf? Never! Do I think Merullo is a fine, perceptive writer who can make you believe just about anything? Absolutely.”
— Sam Coale

Orlando Sentinel – December 18, 2005
“The tale of Hank the earthly pro and God the eternal swinger is engagingly and wittily told by Roland Merullo… Merullo offers a plot that holds together like a string of birdies on the back nine. Amid the laughs and playful banter, Golfing With God is a serious story of self-examination and growth, the hardest games of all… Amid the lightness of this tale is the deeper story of a man, much like the rest of us, looking to shed his pride and dampen his urges. With Golfing With God, Merullo ranks a place in current golf literature.”
— Colman McCarthy

Boston Globe – December 7, 2005
“Golfing With God [may] sound like a crazy casserole… But Massachusetts author Roland Merullo pulls it off with an engaging plot, humor… and a theology that’s humane… God seems to be piling an awful lot of freight on a mere game. On deeper reflection, you realize that Merullo is only mirroring real life, in which suffering often seems as arbitrary as risking human fates on a golf match.”
— Rich Barlow

Milwaukee Journal Sentinel – October 23, 2005
“Merullo’s tightly constructed social and philosophical novel hits both comedic high points and poignant moments of mankind in all its glorious, sorry state. Viewed from any angle, golf – and God – are well-charted subjects, yet Merullo gives us a tender story and a clean slice of life, full of smart, clean prose… Fins-Winston gets more than a spiritual education; he gets a second chance. Through his eyes, we see heaven as everything we pray for, and more.”
— Catherine Parnell

Cleveland Plain Dealer – October 23, 2005
“Delightful little book… made me feel… that golf was more than just a game, that each shot offered the opportunity for redemption and self-fulfillment… The theories on afterlife and deity are pure fun, regardless of one’s religious convictions, and the themes resonate with anyone who has suffered the insecurities golfing can bring – or who has noticed the parallels between this great game and the lives we lead.”
— Michael K. McIntyre

Library Journal (Starred Review) – August 23, 2005
“Merullo won the Massachusetts Book Award in 2003 for his memoir, Revere Beach Elegy, and followed up that success with the romance A Little Love Story. This latest title will garner him even greater success with its Lovely Bones-like use of a deceased narrator… This New Age novel will appeal to fans of Alice Sebold and Mitch Albom’s The Five People You Meet in Heaven; highly recommended for public libraries everywhere.”
— Nanci Milone Hill

Kirkus (Starred Review) – August 3, 2005
“Merullo partly redeems his story of absurdity by applying his wonderful skills of observation and reflection. Playing at elite courses like Augusta National, with God accompanying him in the form of an attractive young wife, Herman encounters compelling characters both human… and semi-divine… Some fine prose and a genuine sense of spiritual longing makes this better than the premise would suggest.”

Publishers Weekly – August 1, 2005
“Merullo blends knowledge of the game with glimpses into his spiritual journey in this engaging story of golf, the after-life and the spiritual education of one soul’… Merullo infuses his own brand of theology into the story. The first section, set in heaven, is stronger than the second, in which God… travels with Herman back to earth. There, they play some of the best golf courses in search of the golf greatness he missed in his previous life. Inevitably, Herman’s golfing prowess leads to a showdown with evil.” 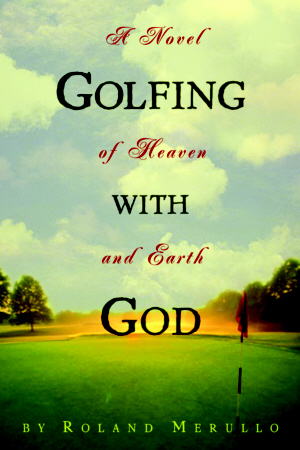