Library Journal – June 1, 2015
Jackley’s captivating memoir tells how she cofounded Kiva, a nonprofit microfinance organization connecting people worldwide, especially those willing to lend small amounts of money, from $25 to potential entrepreneurs in developing countries. Though these entrepreneurs are poor themselves, they have created new businesses even in the most impoverished communities. The loans enable them to take advantage of opportunities and to grow their businesses. Jackley’s life story and personal transformation are intertwined with the lives of these innovative individuals. Her firsthand experiences with these strivers teach her lessons that she would have never learned in her formal MBA program. Each of the 14 chapters introduces readers to an individual who had a profound impact on the author’s development. These stories are truly inspiring because they show how the subjects created businesses with few resources.

Kirkus Review – April 15, 2015
A memoir about how the Internet can help in the fight against poverty, from the co-founder of Kiva, “the world’s first personal microlending platform.” Jackley chronicles how her life was transformed in the fall of 2003 when she heard Muhammad Yunus, founder of Grameen Bank, explain how he was enabling the poor in Bangladesh to free themselves from predatory lenders. Yunus’ account of his work turned the notion of poverty “on its head,” and his speech provided the author with an exciting new method for thinking about the alleviation of poverty. She understood that the poor are “not weak, helpless people. These were people who were capable, tenacious and resourceful.” Jackley went on to co-found Kiva, which enables people to lend small amounts of money, as little as $25, to businesses in countries like Uganda, Kenya, and Tanzania. The author describes how she began to investigate and define a plan that would lead toward her goal. Hooking up with Brian Lehnen and his Village Enterprise Fund, she traveled to East Africa to survey the fund’s grantees and their cultures. In the aftermath of that trip, Jackley designed Kiva to work with existing microlenders, lend money online, and maintain contact through regular updates. As reflected in its mission statement, the company promised “to connect people through lending to alleviate poverty.” Less than 10 people got the ball rolling, and their requests for loans were filmed and posted online. An email to friends helped raise funds, and the author’s venture quickly grew. Yunus’ 2006 Nobel Prize created further interest, which accelerated growth. But it was not all success. In Uganda, they fought against fraudsters and the diversion of funds, and legal and regulatory obstacles doomed her next business, ProFounder. In addition to her own story, Jackley includes folksy business lessons learned from her borrowers—e.g., why the roosters should eat first. A charming account of how “to pursue opportunity and possibility where others see none.” 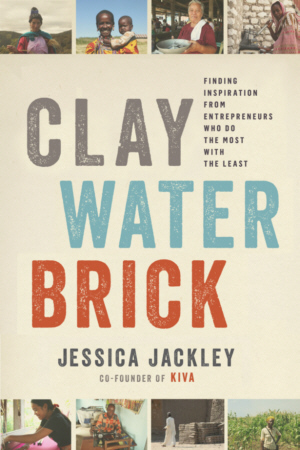