Booklist
“Hackett here blends faith with reality in a novel that is uplifting as it faces hard facts.”

New York Journal of Books
“Ms. Curran Hackett offers remarkable insight into the human psyche as Proof of Angels is an intimate search into one’s soul to perceive what truly matters in life.”

Kirkus Reviews – September 30, 2014
An angel saves a firefighter from a burning building, but his spiritual recovery requires some mortal intervention.Hackett’s sophomore novel gives Sean Magee from Proof of Heaven (2011) his own story. Having fled Massachusetts in the wake of his nephew’s death and his sister’s marriage, Sean has constructed a new life for himself in LA, of course, the City of Angels. A firefighter on long shifts, he numbs his grief by risking his life each day and avoids calling home. But his luck runs out when a sudden eruption of flames traps him in a house, unable to find an exit. About to give up hope, he prays. He promises God that he’ll right a wrong, a wrong that has something to do with a certain Ciara in Italy. And with that prayer, an angel directs Sean to the only escape route and a fall that leaves him burned and broken but mercifully not paralyzed. In addition to his physical injuries, Sean panics that his hard-won sobriety may be at stake. But in short order, a flight of real-life angels gathers to see him through recovery, including fellow firefighter James, a food addict. Brother-in-law Gaspar arrives to set up home-based care with nurse-and-physical-therapist Tom, an exercise fanatic and veteran recovering from his own wounds. Service-dog trainer Libby, a recovering heroin addict, rounds out the team with Chief, the instantly smitten yellow Labrador. Driven to repair his body as soon as possible, Sean relies on his friends, little realizing how much they will depend upon him, as well. Hackett employs the angel metaphor to mind-numbing effect: Everyone who helps another becomes an angel; everyone who doubts the existence of angels is proven wrong; everyone who needs an angel in turn becomes an angel to help someone else. A warm but heavy-handed tale of love and faith. 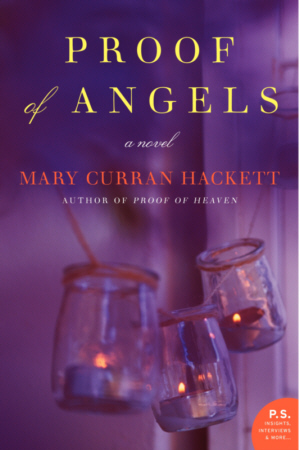