New York Times Book Review – August 18, 2019
“Elegantly wrought… [Chaudry’s] ardor for Paris is evident in her historical filigrees [and] casts a mournful backward glance at epochal moments in the history of Paris.”

Booklist – May 1, 2019
Julien loved Sylvie enough to leave his wife and children for her. He loves her still, watching over her from afar, even though he is dead. It is Paris in 1989, and Sylvie is mourning the loss of Julien even as his spirit remains tethered to her. At her friend’s urging, Sylvie divides up her apartment so an American couple can come and stay. While preparing for their arrival, Sylvie discovers a hidden envelope containing a photograph of Julien’s sister, who was a victim of the Holocaust, and a few papers, including a note signed by someone named Marie. As Sylvie begins to search for Marie, she takes up a quest that Julien had left unfinished, searching for a lost child and unearthing secrets from the past. Haunting Paris is a graceful debut from Chaudhry, its sedate pacing revealing a finely textured world where grief and love commingle. Julien’s spirit travels across time but keeps careful vigil over Sylvie, their separate paths nonetheless a powerful testament to the enduring strength of the bonds we form in life.
— Bridget Thoreson

Kirkus Reviews – March 31, 2019
While a timid French music teacher grieves the death of her partner, outside, on the streets of Paris, his ghost lingers, lending historical context and soulful musings to a story of unresolved anguish and late love .Chaudhry’s elegant debut rests on an unusual and risky premise: It is narrated in part by a soul in limbo. Julien Dalsace has died before the story opens, and his old-fashioned voice sets the scene: “The scent of lilacs on the breeze stirs dormant phantoms to life, but music is sorcery more potent.” We are in Paris in the year of the bicentennial, 1989, observing, like Julien, the struggles of his surviving partner, Sylvie, to cope with her loss. Julien, although spectral, is the novel’s lynchpin. The romance between him—an older, upper-class, married Jewish psychologist—and the quiveringly sensitive piano teacher is the beating heart of the story. But there’s another thread, taking the reader back to 1942, when the Jews of Paris were rounded up and deported, including Julien’s sister, Clara, and her twin daughters. Julien never forgave himself for his absence in London during World War II and his failure to save Clara, but a secret folder that emerges after his death offers Sylvie the opportunity to conclude his quest to discover the fate of Clara’s girls. Julien’s curious perspective—on history, on other ghosts, on the beauty but complexity of France generally and the Île Saint-Louis, his corner of Paris, in particular—is the novel’s most original aspect. Elsewhere, while Chaudhry brings a kind of reverent seriousness to events both past and present, her approach is more familiar. Characters are often simple, like the kindly Jewish baker, the protective (but kindly) concierge, the sympathetic American lodgers, and even Sylvie’s anthropomorphized terrier, Coco. And resolutions, even sad ones, arrive with coincidence and ease. A curious fusion of the predictable and the unconventional which, given the appetite for Paris, love, and wartime tragedy, might well touch a popular nerve. 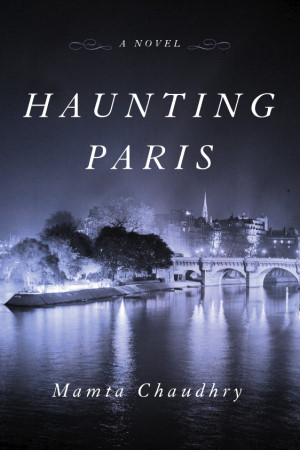