Publishers Weekly – Stared Review – June 14, 2021 (print, on line now)
Thriller Award finalist McMahon’s exceptional third mystery featuring Mason Falls, Ga., police detective P.T. Marsh (after 2020’s The Evil Men Do) sends Marsh to the Falls Magnet Middle School, where former journalist Jed Harrington has taken a teacher and three students hostage. Soon after Marsh positions himself to take out the shooter, he’s called by the governor, Toby Monroe, who’s in the midst of a fraught reelection campaign. Marsh owes the politician, who gave him a lead on the man responsible for killing Marsh’s wife and son. Monroe tells Marsh that his debt will be settled if he kills Harrington, an act that will prevent bad press, and when the gunman points his weapon at his captives, Marsh does so. He’s lauded as a hero, but questions linger about Harrington’s motive and m.o. He had no connection with anyone at the school, and was armed with only a single gun, despite having an arsenal at home. The more Marsh learns about Harrington, the more baffling his actions become. McMahon plants devastating twists like carefully concealed land mines, but never allows the story line to come at the expense of plausibility. This whydunit is sure to win him new fans. 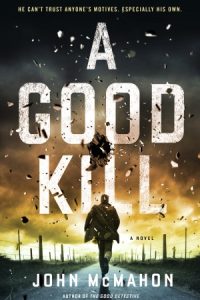