The Civil War Monitor – September 16, 2020
By Sarah Key Bierle
Abraham Lincoln’s life and struggles have been told and re-told in a variety of formats and perspectives. This new release—Old Abe: A Novel by John Cribb—is remarkable for its straightforward depictions of the sixteenth president during the Civil War. The novel’s angle, writing style, and historical details will appeal to generations of readers.

Cribb trains his attention on Lincoln’s life between 1860-1865. Even as it foreshadows the tragic end of Lincoln’s life, the novel never takes on an overly dark tone—maintaining a sprite narrative momentum throughout.

The author’s notes reveal careful research and a delicate understanding of the finer points of crafting a fictional story based on a real life and legacy. Cribb helps his readers relate to the president’s difficulties, losses, and search for peace. It is particularly relatable and heartwarming, for instance, to read the scenes in which Lincoln interacts with his family—and attempts to fulfill the roles of husband, father, and comforter.

Animated by compulsively readable prose, Old Abe moves along quickly. Masterfully, the novel presents details from Lincoln’s life prior to 1860, using wartime events to evoke brief flashback memories. Cribb expertly weaves important biographical information into the story without letting minute details get in the way of a good tale.

History buffs will appreciate some of the more obscure historical references, but all readers will experience something of Lincoln’s world. Sights, sounds, and smells are powerfully evoked—from Lincoln’s law office and home in Springfield to the Republican convention in the Wigwam, from the halls of the Executive Mansion to the president’s walks to the War Department and visits to battlefields and hospitals.

In short, Old Abe presents a fictionalized account of Lincoln’s final, momentous years that history buffs and general readers alike can enjoy. The novel is both inspiring and true to the enduring, traditional image of Abraham Lincoln.

Sarah Kay Bierle is the author of several historical novels and, most recently, an account of the Battle of New Market for the Emerging Civil War Series.

Mountain Times News (NC) – October 2, 2020
…Although we’re listing only fiction on this list, “Old Abe” by John Cribb is a story so developed from primary and secondary research it could qualify as a nonfiction title. The novel covers the last years of Lincoln’s life, and although it is cliche to state that fictional memoirs can bring their subjects to life, the plotting, detail and storytelling of Cribb’s novel does just this.

The story begins in 1860 Illinois, and from there you’ll travel side-by-side with our nation’s 16th president and those most close to him, including his wife, Mary. You’ll witness the devastating effects that public events had on their private marriage, and you’ll be in the room as Lincoln makes his most bold proclamations and decisions.

Cribb has worked some fictional magic here, creating a historical tome for those who would rather not read historical tomes. The author has said that he wrote the novel out of a love for Lincoln and the desire to share that love with others. In that, the New York Times bestselling author succeeds.

Core Virtues Foundation – Review – October 2020
This 323 page novel of the last four years of Lincoln’s life is a complete triumph. Abe Lincoln was the poster child for perseverance (which is why we’re featuring it in OCTOBER instead of February).The backwoods prairie lawyer-turned-statesman shepherded the nation through the four-year war that ended slavery and saved the Union, but cost hundreds of thousands of lives and the life of his young son as well. In this book, we are in the mind and heart of Lincoln from his election to the end of the Civil War. By turns melancholy, humorous, and deeply moving, you’ll reconnect with Lincoln’s love of country, love his wife and kids, and struggle to ensure victory for the better angels of our nature. A vivid and well-paced read.
We think our times are tumultuous and our struggles are many, but they pale alongside the national and personal trials faced by Old Abe.

[Core Virtues Foundation is an organization that promotes virtues-based education in schools around the country.  https://www.corevirtues.net/october.html#parent]

Midwestern Reviews – September 2020
A deftly penned historical novel that showcases the author’s genuine flair for originality, a close and entertaining story that accurately adheres to historical detail, and the kind of narrative driven storytelling style that fully engages the reader’s attention, “Old Abe” by John Cribb will prove to be an immediately and enduringly popular addition to personal reading lists, as well as community and college/university library collections. 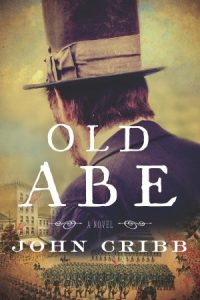