Minneapolis Star – May 13, 2018
“The characters are compelling and the story’s twists are riveting, right down to a scene above Niagara Falls, yet nothing is played for easy drama. The northernmost reaches of the North were every bit as entrenched in the war, all without ever seeing a Rebel uniform. Wang reminds us how the rights of men and women, as well as the foundations of the Union, were tested along the icy shores of Lake Erie just as much as along the muddy Ohio River.”  (Kim Ode)

Booklist
“Action packed, taut with tension, and filled with memorable characters, this powerful debut displays the currents of history as they run through one small town, carrying away lives in their wake.”

Kirkus Reviews
“A vivid, compelling portrayal of the heartbreaking price exacted for freedom”

Library Journal
“Revenge, righteousness, and a desperation for freedom are the spirits that possess the characters of Wang’s first novel…Certainly for Civil War buffs, but readers of modern political fiction will also see some similarities with our present political passions.”

Atlanta Journal-Constitution
“Packed with action and enough plot to fill another book, The Hidden Light of Northern Fires speaks to the push-pull friction of independence vs. community and the secessionist tendencies of the American dream.”

Richmond Times-Dispatch
“A multi-layered, sweeping tale of family and intrigue ― and a love story ― Wang’s novel raises questions of race and gender and delivers an emotional knockout. The Civil War novel ― think Margaret Mitchell’s Gone With the Wind or Michael Shaara’s The Killer Angels or Charles Frazier’s Cold Mountain ― holds a storied place in American literature and the American psyche. The Hidden Light of Northern Fires aspires to ― and reaches ― that summit.”

Asheville Citizen-Times
“The Hidden Light of Northern Fires is a wonderful example of creative, compassionate and deeply critical engagement with our history – perhaps a model we all need today.”

ArtsATL
“Wang proves himself an adroit storyteller, presenting readers with that sublime dilemma: whether to reread and savor a paragraph or compulsively turn to the page to find out what happens next.” 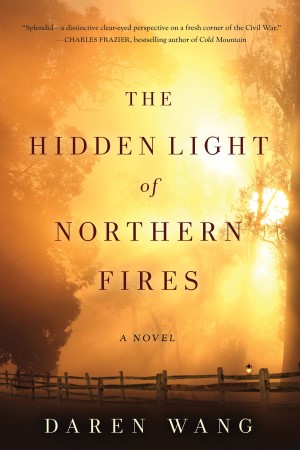