The Economist –July 1, 2017
“WHEN an American policeman pulled over a Volkswagen (VW) Jetta in 2013, he suspected that the array of pipes sticking out of the back of the car and the grey box and portable generator in the vehicle were a sign of something fishy. He was right. ….The decision by VW, a pillar of Germany’s car industry, to fit “defeat devices” and cheat emissions tests in up to 11m cars has so far cost the company $21bn in fines and compensation in North America alone.

Why did the company deliberately set out to engineer cars that spewed out up to 35 times more poisonous nitrogen oxides on the road than stated in official tests? Jack Ewing, a journalist for the New York Times, offers a timely guide to the scandal, setting out in detail why VW’s corporate culture led to the deception…..To meet that demanding (sales) target … VW had to cheat…Mr. Ewing explains why VW cheated, but pinpointing who was responsible has been much harder.

London Daily Mail–June 8, 2017
“This book, which races along like Jenson Button, tells the inside story of the Volkswagen scandal.

The car maker had steadily built up a reputation for automotive excellence over many years….such good will is impossible to quantify….little did outsiders know that throughout the Nineties and 2000s the company was run almost as a personal fiefdom of Ferdinand Piech…… when he was pushed upstairs, his replacement as CEO was ….Martin Winterkorn, a bear of a man…. these two men inculcated a regime of fear and loathing at Volkswagen. Do what I want you to do or I’ll fire you….
Volkswagen installed a “defeat device” into the software that could tell when a car was being tested….it was a cheat, basically. It took the regulatory authorities years to catch up with this. A research team tested a Volkswagen Jetta and Passat, which issued more nitrogen oxide than a modern long-haul diesel truck…some vehicles were issuing 40 times the legal limit….

As a result of one court case Volkswagen had to cough up $15 billion.  Nevertheless, the goodwill and reputation are gone forever. ….it’s an old story, and Ewing tells it quite beautifully.”

Kirkus Reviews – May 23, 2017
“An exposé of the scandal that threatened to bring one of the world’s greatest automobile manufacturers to ruin. By installing “defeat devices” and software designed to underreport automobile emissions, Volkswagen executives violated international laws and protocols. What surprises most about that decision, writes New York Times European economic correspondent Ewing, is that there was no clear motivation for it: the people responsible were not enriched by it, and indeed they took “enormous risk for such a modest gain” given that the unit savings were so small. Something larger than mere gain must have motivated them. But what?

In this thoroughgoing account of the affair, the author ventures a few guesses….
What went wrong went badly wrong, and it was especially enraging to environmentally sensitive buyers who had bought Passats, Golfs, and other models precisely to do their part in saving the planet. Meanwhile, as the author reports in a narrative that soon turns to true crime, albeit of the white-collar variety, it was VW’s foot soldiers who took the fall, at least at first, despite the $15 billion fine imposed for violations of the Clean Air Act and other laws.
A shocking, sobering story—and, given the current anti-regulatory mood, one likely to be repeated.” 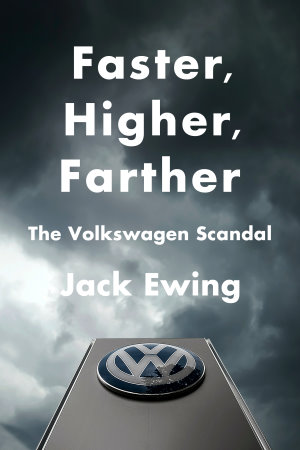