Booklist – July 1, 2016
Schulman was a fiftysomething guitarist when, on the night of July 16, 2009, he almost died after complications following pancreatic surgery for what was initially thought to be a malignant mass. After he was put in a medically induced coma, no one expected him to survive. But he did. Some even called him a medical miracle. But 12 days in the hospital took its toll. The slightest movement of his fingers “took a huge effort,” yet, miraculously, he could still play the guitar, although he could only remember six pieces of music—all learned before he was 20. Everything else had to be rememorized. Today, he is a resident musician in the surgical intensive-care unit at Mount Sinai Beth Israel hospital in New York City, where he almost lost his life. Now he plays his guitar—Bach and the Beatles being among his favorites—at the bedsides of critically ill patients, referring to himself as a “medical musician.” Schulman offers deeply moving testament to resiliency, perseverance, and growing recognition of the genuine healing power of music. — June Sawyers

Kirkus Reviews – May 14, 2016
“[A] heartfelt chronicle of unorthodox medicine… An inspirational testament to the limitless benefits of music and its role in palliative health care.” 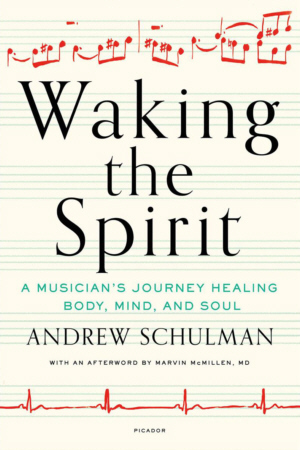