Library Journal – January 15, 2009
This short story collection tracing the lives of three generations of the immigrant Italian American Comingo/Cummings family by first-generation Italian American Romano (When the World Was Young) is startlingly sophisticated and engrossing. Fundamentally, each story is about identity, belonging, and growing up—a process that lasts well into old age. Youngest son Jimmy Cummings (born Giacomo Comingo), an outsider to both his family and his 1950s Chicago neighborhood, is the character around whom the book revolves. The stories are told from various points of view that rotate among family members and an omniscient narrator; each is a pearl by its own merit, but strung together they form a thoughtful, provocative family history that reveals each character’s humanity in finer detail. Romano’s spare, expert prose allows even tropes such as a food-pushing, helicopter Italian mother and infidelity to transcend stereotype and cliché. Romano deftly and sensitively guides readers through lives that are both pedestrian and profound. An impressive sophomore effort; recommended for public libraries.
— Megan Hodge, Randolph-Macon Coll. Lib., Ashland, VA

Chicago Sun Times – January 4, 2009
“[Romano] drills deep into the interior life of one Italian-American family in Chicago… packs a lot of emotional detail about both family and neighborhood in crisp, efficient prose… the book’s title, which comes from one of Lucia’s proclamations, aptly summarizes Romano’s world — there’s genial, homespun wisdom on the surface, but underneath is a thicket of concerns about surviving the American experience.”

Time Out Chicago – January 1, 2009
Following up When the World Was Young, his 2007 debut novel, IF YOU EAT, YOU NEVER DIE (Harper Collins, $13.99) reads like an autobiographical novel-in-stories… To Romano’s credit, the alternating narrators don’t draw attention to themselves, each voice fits the story being told… One of Lucia’s two stories, “Whistle Opera,” was nominated for a Pushcart…. “Treading Water” earned Romano another Pushcart nomination, and won a Whetstone Prize. Told by Jim’s wife, Teri, it captures the honest, contradictory emotion of an overwhelmed mother.

Chicago Tribune – December 20, 2008
Family history, collective and personal—and the fault lines that distance people united by blood—is at the heart of Chicago writer Tony Romano’s “If You Eat, You Never Die: Chicago Tales.” In a series of atmospheric stories, he explores three generations’ points of view, constructing a layered portrait of Comingo/Cummings’ memories and experience. The structure of the book supports a kind of kaleidoscope: parts that, put together, influence the whole. The result is an evocation of time, place and immigrant experience that comes alive with strong detail.

Booklist – December 15, 2008
“…masterfully distilled stories… Romano illuminates a Chicago neighborhood and an entire universe of dreams and disappointments. All the psychological luster of his debut novel, When the World Was Young (2007) is found here curiously amplified by the restraint of the shorter form. Romano narrates fluently from different points of view… Romano has a penetrating eye, respect for life, poise, and deep understanding of how helpless we are when emotions and actions betray reason.”

Publishers Weekly Starred Review – Pick of the Week – October 20, 2008
In this haunting collection of linked short stories, Romano (When the World Was Young) explores the Italian immigrant experience in Chicago. Primarily set in the 1950s, several stories are narrated by Michelino and Giacomo as boys. These stories expand to include tales told through the eyes of their mother, Lucia, and later their own wives and daughters. Romano also examines the family from the outside in, such as the story “No Balls,” when Giacomo’s coach vents his frustration when Lucia forces her son to eat so much that he’s overweight for his wrestling match. In “Comic Books,” Giacomo learns a difficult lesson when he sees how his friend Angelo “earns” a motorbike from a local merchant. The overwhelming themes of love, loss, grief, struggle and isolation are expressed in unsentimental and sometimes even desperate prose. Dreams, and the failure to reach those dreams, choices, risks and settling (or not settling) permeate this moving collection of tales that will stay with the reader long after the book is shut.

Kirkus – October 1, 2008
Three generations of an Italian-American family strive to assimilate in a lovingly imagined collection of linked stories.

Romano (When the World Was Young, 2007) focuses on the Comingo family, which arrives in Chicago shortly after World War II. Underachieving patriarch Fabio manages a barbershop with a dearth of customers. Headstrong mother Lucia offers heaping helpings of both food and no-nonsense wisdom, including the axiom that provides the book’s title. Son Giacomo is eager to escape his heritage; older brother Michelino proudly embraces it. …The author’s depth of feeling for his characters, combined with his ability to follow their subtle transformations through the decades, is affecting….By the book’s close Romano has offered a wealth of details about jobs, heartbreak, religion and the business of making it in America.
A spirited evocation of a complex immigrant culture, willing to show the scars its characters bear. 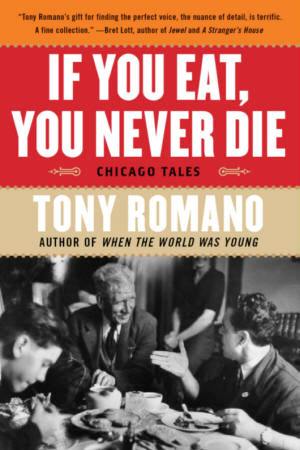