Every novel seems to have some sort of spark, something that was haunting the author that compelled him or her to write. What was it for you?

When I was young, my favorite stories were the ones my mother and her two sisters would tell me about their childhood in Brooklyn. They lived with their parents on the top floor of a two-family house, and my grandmother’s brother, his wife and their three daughters lived on the bottom floor.

My aunts told the best stories – tales of knish carts, holidays and visits to a fancy Italian restaurant in Manhattan. As a young girl with only one brother and no sisters, I couldn’t imagine anything more wonderful than growing up in a two-family house as one of six girls. That home became the setting for The Two-Family House.

The spark for the story was separate, and it was something that came to me when I was pregnant with my first child. I had made a deal with my husband about how many children we would have – I had agreed to stop at two, but I insisted that if the first two were boys, we would try again for a girl. My desire for a girl was something that consumed and confused me. Why did I care so much? Why did anyone?

My grandmother, the mother of three girls, told me many times throughout my childhood how much she had wanted a boy. My brother was the first of her four grandsons, so you can only imagine how much she doted on him. There is a scene in The Two-Family House where Helen remembers her grandmother giving her brother the coveted cherry from the top of the chocolate cake she brought every week from their local bakery. That was me – my grandmother let my brother have the cherry every Saturday!

I thought about gender a lot when I was pregnant, about how far people might go to have a boy or a girl. Then, six months after my daughter was born, I read an article about a new technology that allowed couples to come closer then ever to choosing the gender of their baby. I wondered whether my grandmother would have used something like that if it had been available in her time, and it occurred to me how lucky it was that both she and her sister-in-law had three girls each. There was no reason for envy or resentment to fester. But I couldn’t help imagining what might have happened if one of them had all girls and the other all boys. What would that house have looked like? What if they had been pregnant together? Imagine the tension!

That’s where the story came from, and for years I would tell different ideas about it to my husband and to my friends. I was telling this story for at least ten years before I ever started writing it down.

What kind of writer are you? What’s your process like—and what do you wish it were like?

Well, I’m still figuring this one out, but while I was writing The Two-Family House I found that my need to include certain scenes shaped my process. Before I started writing, I had a list of very specific situations I wanted to put the characters in, certain moments I wanted them to suffer through, especially after the night of the blizzard. A lot of people have described The Two-Family House as “character-driven,” and it definitely is. But what drove me while I wrote was my desire to show the behavior and reactions of the characters when they were in distress.

For instance, I wanted to have a scene where Helen was required to fill out paperwork for one of the children. It sounds like such a mundane task, but given the story, that moment where Helen has to write down what her relationship is to Teddy on a hospital form becomes very dramatic. Once I had that scene in my mind, I had to figure out a way to get the characters to the emergency room, so I came up with Teddy’s accident at Sol’s party. The creation of the party led to other events – Rose wandering off, and Mort blaming Judith. Every time I put my characters in an uncomfortable or painful situation, they took over. They did and said things that surprised me, but working that way helped me get closer to them and to craft a more realistic story.

I wrote The Two-Family House from the points of view of the six main characters – four adults and two children. This structure helped me get into each character’s head in the best possible way, and it allowed me to dig very deeply. One thing I loved about this method was that it allowed me to replay certain moments from different perspectives.

The last thing I’ll say is that while I was writing The Two-Family House, I discovered what a linear writer I am – I have to write my stories in the order that people will read them. I can’t skip ahead and write the ending because I need to experience the story along with the reader. As I write, things change, characters develop, details are added and layers accumulate. For instance, I could never have written about Natalie as a young woman until I had written about her as a child. I wish I were not so tied down to this way of writing, because when I get stuck, I am truly stuck! I can’t make myself work on a different part of the story, and sometimes that drives me nuts.

This is your debut, so what’s up next? And does having one book published feel like writing the next book will be easier?

I’m very excited about my next book! I’ve been working on a story about a recently engaged young woman and her grandmother. The grandmother has kept a secret from her family for over fifty years, and it finally catches up with her as she watches her granddaughter navigate the upcoming wedding. There is more humor in this next book than there was in The Two-Family House, but it is still a complex and character-driven story. The book flashes back to the grandmother’s days as a young woman, so we get to see a lot of the 1930s and 1940s in New York.

It’s definitely easier to write this second novel. Some of that stems from the fact that I have more confidence in my abilities, but a lot of it is because I have learned how to be more productive.

I always want to know what surprised you in the writing of this particular book, how the characters took over, or the plot changed, or any way, really. What surprised you?

I love this question! When I first started thinking about The Two-Family House – and long before I began writing it – I was focused on the women in the story. Back then, they weren’t Helen and Rose yet, but I knew that one of them would be the mother of four boys and one would be the mother of three girls. I was obsessed with these women, and I spent years thinking about them and asking myself questions about them. What kind of women were they? What kind of mothers? What were their relationships with their children like? What were their secret longings and what disappointments had life thrown their way? What would happen to their relationship if they made certain choices? Sure, I knew there would be men in the story, that Abe and Mort would be important characters, but I didn’t really think about the emotional trajectories of the men in the same way. I always thought that the women would be the real stars of the show.

But when I began to write, the men became just as important as the women, and I grew just as attached to them. I always knew Abe would be a great guy, a lovable mensch, from beginning to end. We all know people like Abe, so he was easy. But Mort? Mort was the toughest, initially the most despicable, and, in the end, the biggest challenge to write because of the way he redeemed himself and changed his way of thinking. What surprised me the most was how much I looked forward to writing the chapters that were told from his point of view.

I knew Mort would grow on me, but I did not anticipate how much his character would consume my thoughts. He kept getting more interesting, more multifaceted and more conflicted as I wrote. I wanted to know what drove him to behave the way he did, I wondered if he could truly change, if he could forgive and love and mourn. Mort captured my heart in a way I never could have predicted when I began to write the story. The novel started out as a story about two women, but in some ways Mort emerged as the most complex character of all.

What’s obsessing you now and why?

I’m a big musical theater person, so it won’t surprise you to know that I am thoroughly obsessed with Lin Manuel Miranda’s Hamilton. I dragged my husband and friends to see it at The Public Theater last winter, but we had no idea what a phenomenon it would become. When the soundtrack came out, my daughter and I began listening to it, and now it is on a constant loop in my car. I finally took her to see it in January for her 17th birthday, and she was completely blown away.

I think that Hamilton has particular appeal for writers – the focus is on the lyrics, and the words are the stars of every song. Plus, one of the recurring themes is Hamilton’s writing – how much he wrote, how he couldn’t stop himself from writing, how he even tried to write his way out of public scandal. I think that all authors can relate to that overwhelming need to write, and to fill a creative void.

Plus, the other appeal for me is that the show was inspired by Ron Chernow’s biography of Alexander Hamilton. You have to love a musical that is based on a book!

What question didn’t I ask that I should have?

Well, one question that people ask me a lot is when the reader is supposed to know the truth of what happened the night of the blizzard. The answer is that I always assumed that readers would figure this out quickly, or at least have strong suspicions from the beginning of the story. I tried to keep the night of the blizzard murky and mystical – without coming right out and saying what happened – because I wanted it to haunt the reader the same way it haunts Helen and Rose. But I always intended the book to be a drama and not a mystery: the choice the two mothers make is not a secret I want to keep from the reader – rather, it is a secret that Rose and Helen keep from the other characters. For me, the most compelling part of the story is not the choice that Helen and Rose make – it is the way that choice affects the rest of their lives, their relationships with their families and with each other. 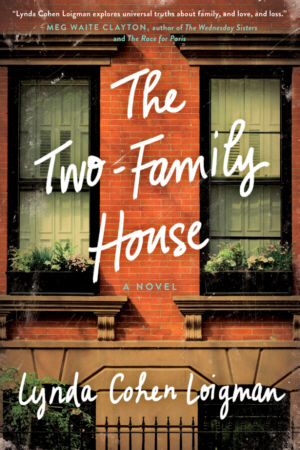